After a night of analysing the weather in great amounts of detail, and now armed with our new 2 o’clock rule, we were up before the crack of dawn and setting sail for la Coruna. As usual on this part of the coast, we seemed to be tracking straight into the breeze. The seas were lumpy and unsettled but all in all it wasn’t too bad.

We made the 50nm around to la Coruna in good time. We were well inside the ria as the wind started to pick up at you guessed it, around 2pm. La Coruna has two main marinas and Mike, being in the lead, called both of them up, only getting a reply from Marina Coruna.

Then a guy on a bike cycled out to end of the jetty and guided us to our berth, right beside Ooroo.

Marina Coruna turned out to be a good choice, reasonably cheap by Spanish standards, great staff and facilities.

Safely berthed and formalities attended to it was time to have a corona in A Coruna. However it was not to be as Corona can’t legally go by its usual name in Spain because the Spanish royal family owns the trademark Corona. It therefore is sold in Spain as Coronita, meaning “little crown.” Never mind, it still tasted good, and as we were to later discover the local beer called Estrella Galicia was a pretty good drop at half the price. Food and drink is crazily cheap in Spain.

Then it was into town to check it out.

La Coruna is full of history. The main square is dedicated to Maria Pita, whose either famous for single handedly repelling Sir Francis Drake’s English Armada, or perhaps having four husbands, some of which unexplainedly died, leaving their wealth to poor Maria. We learned lots about Ms Pita on a free night-time tour of the city the following night.

Talking of which, the free tours that the city puts on just about every day are great. The guides do a great job first speaking Spanish then English and dressing and acting the part. Unfortunately, I missed the tour of the Torre de Hercules, the oldest working lighthouse in the world, originally started by the Romans (what have they ever done for us?).

But I made sure I was on the Picasso Tour (Picasso lived here as a kid until his sister died and the family moved to Barcelona). The guide was a hoot and played the part to perfection – he was evidently a professional actor. We visited a lot of the city on this tour and saw the family home that Picasso grew up in – its now a museum. Interestingly, Picasso “invented” the white dove, which is now the international symbol of peace, whilst studying art at the local arts college.

A Coruna was where Joan left us. The airport was at Santiago de Compostela, a beautiful old town that marks the end of the pilgrims walk to the burial place of st James, one of the apostles. Whilst allan went with joan, I had the engines serviced, along with two other lagoons – a very popular place to do the 50 hour service it seems.

Engine service completed, I headed to the train station, an hours walk away and paid my €5 for a ticket to Santiago on a swish new train. 40 minutes later and I was there. A 30 minute walk into the old city and I found Al outside of the main cathedral. He was still buzzing from having attended 12 o’clock mass – quite an elaborate affair full of pilgrims. Even though Allan wasn’t religious, it seemed to have had quite an effect on him.

The cathedral is just great to walk around with lots of little chapels spread around its edges, interspersed with old fashioned confessional boxes. The central attraction was the tomb of st. James, located directly underneath and behind the main alter. It was a very moving place.

Santiago is full of old churches, university buildings, shops and tapas bars. We had a coffee with one of the pilgrims, a lady from Denmark, who had a car crash 13 years ago and couldn’t walk more than 500m last year. She went on her own spiritual and healing journey, walking the whole 700kms along the Camino de Santiago, the famous pilgrims walk, to get there. My friends Paul and Jenny did a bit of the walk last year and rob has also done it so it was good to see what it was all about.

We finished the day by going to the 7pm mass, but this turned out to be much more low key than the midday mass as most of the tourists and pilgrims had left for the day. I thought there might be hope for Allan yet, two masses in one day, but we went to a bar straight after and I realized he’s probably beyond saving.

Back at La Mischief, and with a good sleep under our belts, next day we were off, heading south. 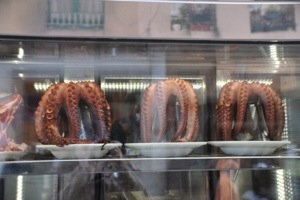 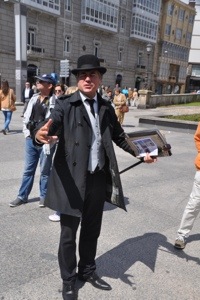 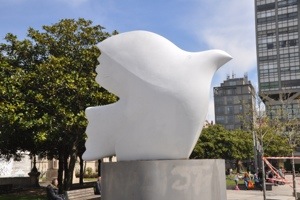 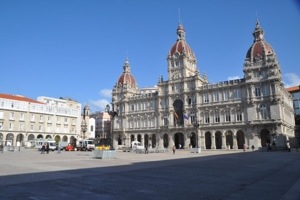 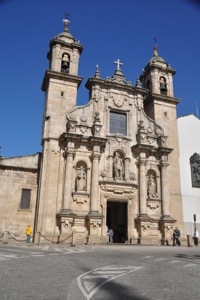 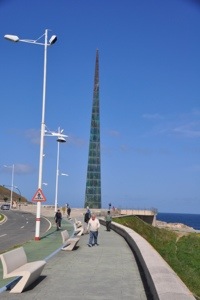 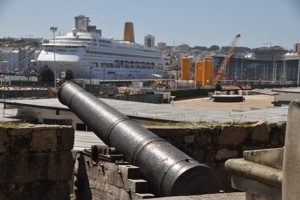 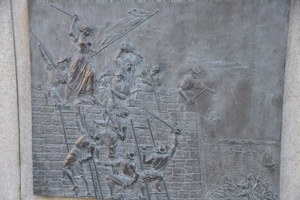 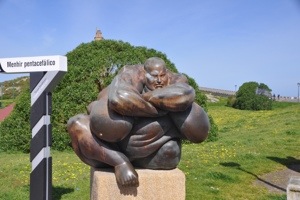 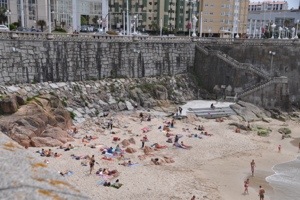