With a big tick in the “We’ve Been To Cappadocia” Box, it was time to hit the road. And the road we hit was the famous old Silk Road that passed through Cappadocia on its way to Konya. There were Caravanserai every 30-40km, roughly the distance your average Camel could cover in a day. We stopped at a couple of impressive Caravanserai, with their big courtyards and bedrooms around the sides on our way back to Konya. 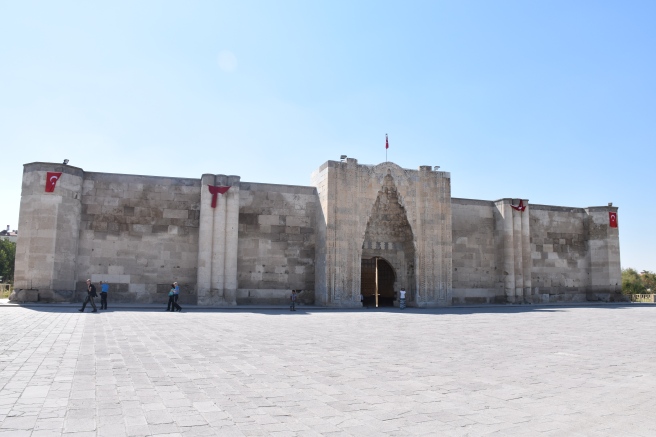 On the way to Konya we also decided to veer off the main highway and head out to the World Heritage site of Catalhoyuk, where they have dug up a whole Neolithic Town. Theres a small museum and a couple of giant sheds covering two extensive archaeological excavations, but as far as building something interesting to look at the Neolithics were way behind the Romans and Greeks.

We arrived in Konya at about 5pm and went straight to the Restaurant where we had the best Lamb Tandir Kebab. This time there was no holding back as we ordered 300gm each and enjoyed every mouthful of it.

Back on the road again, our plan was to head towards the Taurus Mountains and stop for the night after an hour or two. We got to Seydişehir thinking that it’s a reasonable enough size to have a decent hotel or two. However nothing looked promising and so we decided to hit the road again.

As we headed up the Taurus Mountains the rain started again and the towns thinned out. Tripadvisor was telling us there was a reasonable hotel at Akseki so that’s where we headed. Never believe what you read on the internet but at least it was a bed for the night.

Next day we headed down the mountains to the sea, popping out just East of Side. We drove in there for a quick look at the harbour and a coffee. Decided the ruins and the cute seaside town required further exploration by boat and pushed on.

Next stop was Aspendos, known for its Amphitheatre, which is one of the best from the Roman world. Attaturk decided it would be done up and used for live performances – something not everyone agreed with at the time but I must say it makes for a spectacular setting. Other than a few nice Aquaducts (what have the Romans ever done for us?) , it was all about the Amphitheatre and not much else. 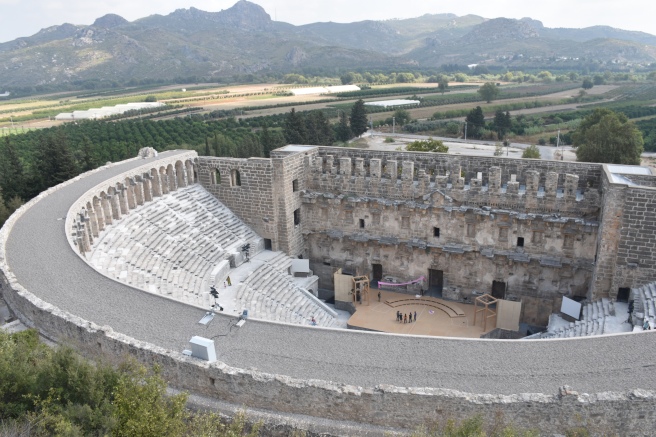 Whilst we were in a ancient ruins state of mind we decided to check out Perge as well .Perge is where Apollonius of Perge hung out, a bit of a Grecian mathematical hero of the times. Evidently Kepler hooked into his work when Perge was rediscovered during the Renaissance and this helped Kepler develop his now famous laws of planetary motion. Well there you go. Perge is chockers full of ruins – city walls, sports stadiums, marketplaces, the full box and dice.

Then it was time for lunch and a swim at one of Antalya’s many beaches. Antalya’s a big, big city and it took us a while to drive through it. After the swim we headed to the old town and walked down to the old port. In season, it’s almost impossible to get a berth here but we intend to come back out of season and see a bit more of Antalya.

It was getting late in the afternoon as we left Antalya and headed towards Olympos. We wanted to see the famous Chimaera and the best place to stay to do this is Cirali Beach, just up from Olympos.

We made it there just before dark and did our usual canvassing of hotels before picking a nice one at a bargain price. This gave us just enough time for swim and a bottle and a swim on the beach before heading off to dinner at one of the beachside restaurants. This took us all the way to 10pm when we drove to the carpark at the bottom of the walk to the Chimeara and set off along the 2km walk in the dark – along with quite a few others.

Homer described the chimaera as a fire breathing monster who was slain by a local Greek hero; and the fire that comes out of the rocks is the eternal breath of the monster. Hate to disappoint but there are no monsters, just a continual stream of methane gas coming out of several spots in the rocks. We wandered around looking at all the spot fires before settling on one to roast our marshmellows. The Turks had a go at trying to claim the Olympic Torch relay originally came from Chimaera but they got shot down pretty quickly. Still,, it was pretty damn cool!

Next day, it was time to drive back to La Mischief after nearly 2 weeks on the road. On the way back we called into Finike and caught up with Sherrie and Shaun on their Catana, who we last saw in Santorini. We also called into Demre and saw the Church of St Nicolas, which was buried below ground until it was escavated, and Myra which is another A Grade set of ruins.

Then it was back to Kas where La Mischief was waiting and off to Smiley’s Restaurant to thank him for looking after her.