After 5 days and 4 nights we finally made it to Marina Puerto Bahia, just around the corner from Samana in the Dominican Republic. Follow Me and Vela kept us company the whole way, with Follow Me getting the prize for sighting the most whales. The trip was largely motoring into light winds, sometimes getting a little bit of wind angle to lighten the load on the engines. In the end we still had 2/3 of a tank of diesel for each engine and no breakages – a good trip.

Marina Puerto Bahia was a great find. At $1 a foot, it was one of the cheapest marinas I’d stayed at and it was right next to a 5 star resort with an infinity pool overlooking the ocean. Our slip was pretty challenging, with La Mischief just fitting between the pylons with the fenders on both sides getting a good work out. Backing into a small slip with a current pushing us sideways and Jamie and Ashley in learning mode pumped the heart rate up a bit. Took us 3 goes to finally get in.

Customs and Immigration was straightforward and reasonable, $106 for the 3 of us with no “tips” required. 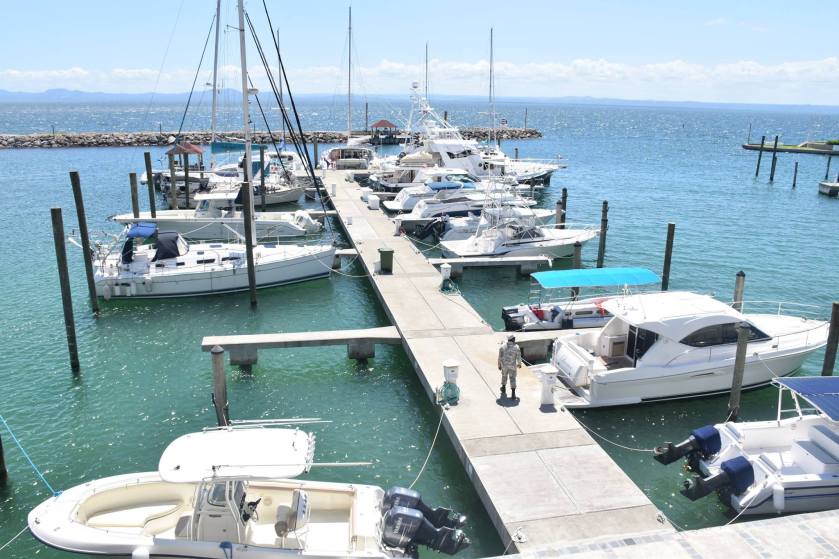 That night we hosted all the other boats on the back of La Mischief and made some new friends. Which was a good thing as Sam and Erin had hired a car that turned into a 9 seater van and we spent the next few days touring the north east of DR. 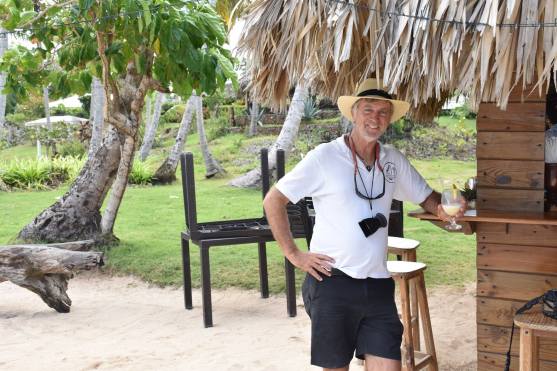 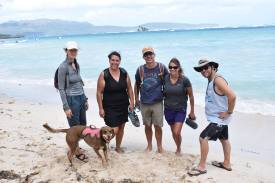 Our first stop was an ATM in Samana to get some pesos. Samana was lively, jam-packed with locals riding motor cycles, but being a Sunday a lot of shops were closed. Cashed up, we headed off to Las Galeras, an old fishing village that has been given over to tourism. By now the huge northerly swells that we were racing to beat had hit and it was pretty awesome looking out on the Atlantic. Piper, Sam and Dawn’s dog was also pretty impressed with chasing coconuts down the beach.  Finally we settled on a few Pina Coladas at a beach shack and came away saying they were the best Pina Coladas we had tasted with wonderfully fresh pineapple juice.

Next we wandered around to a little cove along the coast to a really nice beach and nice beach bar for lunch. DR food is delicious and cheap. I was beginning to really like this place. Jamie managed a swim but was asked to leave the water – the police mentioned sharks (?) but we think they thought it was too rough.

Our final stop of the day was the blowholes on the east coast. The road was borderline 4WD but Sam did really well with only a few bounces on the rear end of the van. The blowholes were working with the swell and Sam almost got blown away at one stage.

By now it was getting late in the afternoon and we’d been told not to drive at night because of the locals penchant for driving without headlights. So we headed back to Samana and did a bit of fruit and vegie shopping.

Next day we decided to hit the waterfalls at El Salto Del Limon National Park. We upgraded to the horse ride and all got on some under slightly nourished horses. Next time, I think we will walk. The waterfalls were a 15 minute ride in on a rough track and were quite spectacular. DR is known for its waterfalls and they didn’t disappoint. Sam being Sam went for a swim but it was too cold for Steve the Wimp.

Having been dropped off, we were asked for a “tip” that was more than what was negotiated and paid for at the start. I think they saw a bunch of Americans and decided they were fair game. 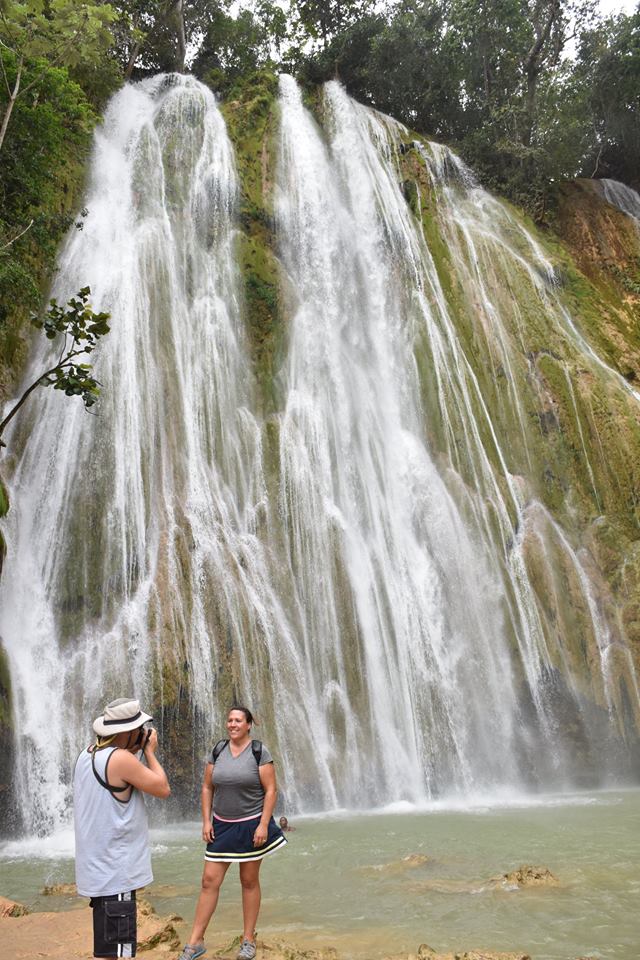 Adventure over, we drove into Las Terrenas in search of the famous Love Shack. We found it on the beach but had to go down the broadwalk to another restaurant for lunch as it was only open at 3pm. The seafood paella wasn’t up to Valentia standard but still yummy.  We then made it back to Love Shack, where we got stuck into pool over a few beers. David from Oceananigans managed to beat us all – obviously able to hold his beer better than us older folk!

Tuesday came and it was our last day at the marina, before we headed off for a night at the National Park across the bay. I organised for the boat’s decks to be waxed and polished and all the stainless to be done for $130USD….a real bargain given the manpower and detail applied. The rest of the day was spent enjoying the resort and catching up on the great internet.

That evening the marina put on some hors d’orves and drinks at the hotel and it was good to catch up with some of the staff as well as a couple of other boats we had not met. 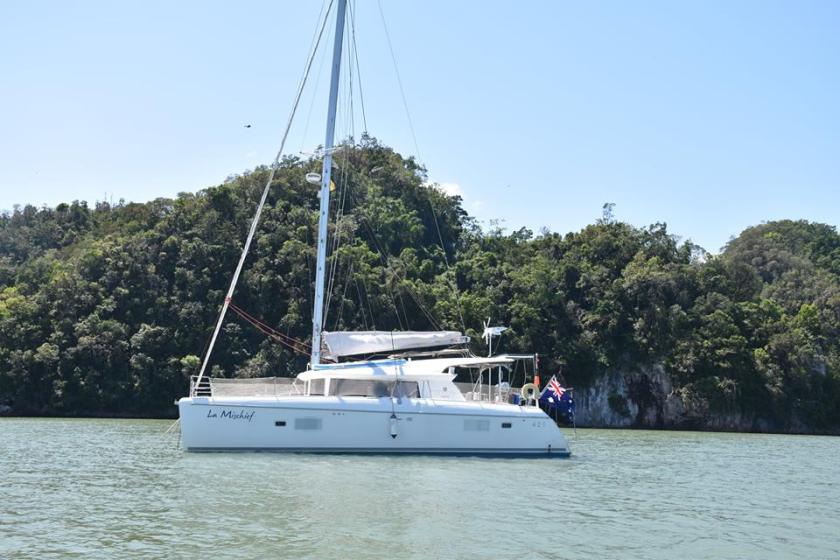 Next morning, we got our dispatchio for Parque Nacional Les Haitises, 10nm across the bay. We dropped anchor in the protected bay right where active captain said to. We only had a day there because of the weather window coming up so we quickly dropped the dinghy and got into exploration mode.  We headed for the narrow creek where all the day boats were going and made our way up a narrow creek with limestone cliffs on one side and mangroves on the other until we got to a jetty with two big tour boats attached, We secured the dinghy and made our way to explore the cave a short walk away. We battled our way past quite a few tourists and enjoyed its beauty.

Back in the dinghy and onto the next cave around a couple of islands and headlands. More tourists. We beach landed and paid our $2 a head fee. This cave was right on the coast with several openings jotting out into the bay.

Our final stop was the Eco Resort, miles up a mangrove lined creek with lots of birdlife and fish jumping in front of us. We finally made it to the end of the creek where the mangroves gave way to open farmland. We had a short walk to the Eco Resort which was very impressive, given it Gaudi like architecture and its elevated location overlooking the bay across to the mountains on the other side.

Also impressive was the fresh water swimming pool that was fed by a mountain stream, which when accompanied by several beers from the resorts bar, provided an idyllic place to spend a relaxing afternoon.

We returned back to the boat in time to enjoy a lovely sunset, over a few more beers. At some stage we thought it a good idea to raid Dee’s sparkling supply and that eventually put us on our respective ears. 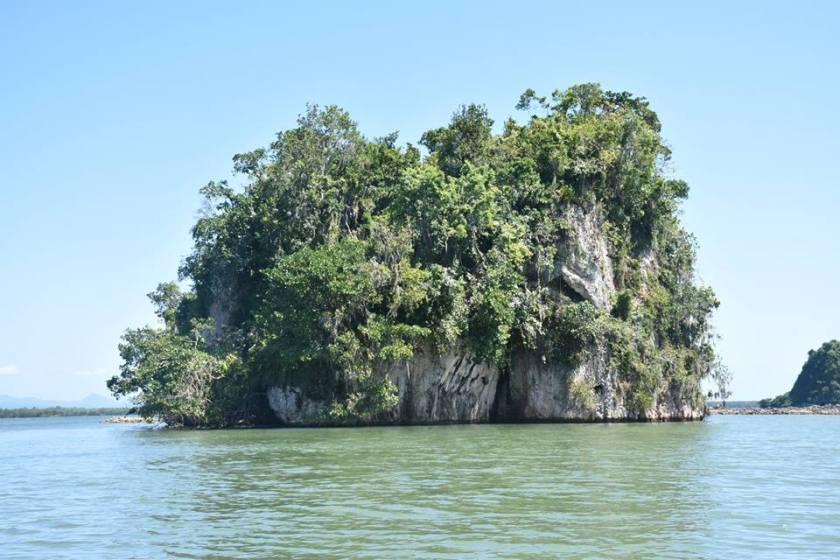 Next morning, it proved somewhat difficult to rouse my crew as we needed to take our hangovers from DR to PR, across the notorious Mona Passage. But first we had to call into the marina and pick up our dispatchio to allow us to leave DR and have our passports stamped. Our visit to DR had been all too brief as it turned out to be one of my favourite islands. 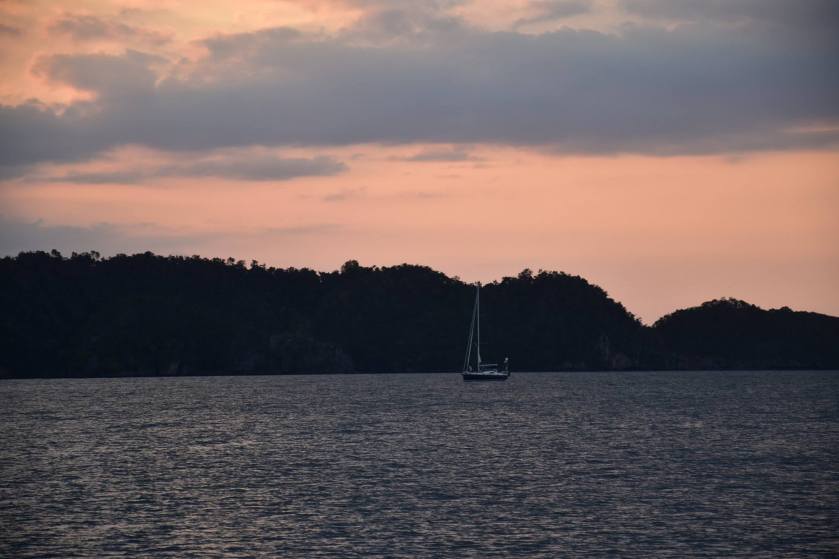