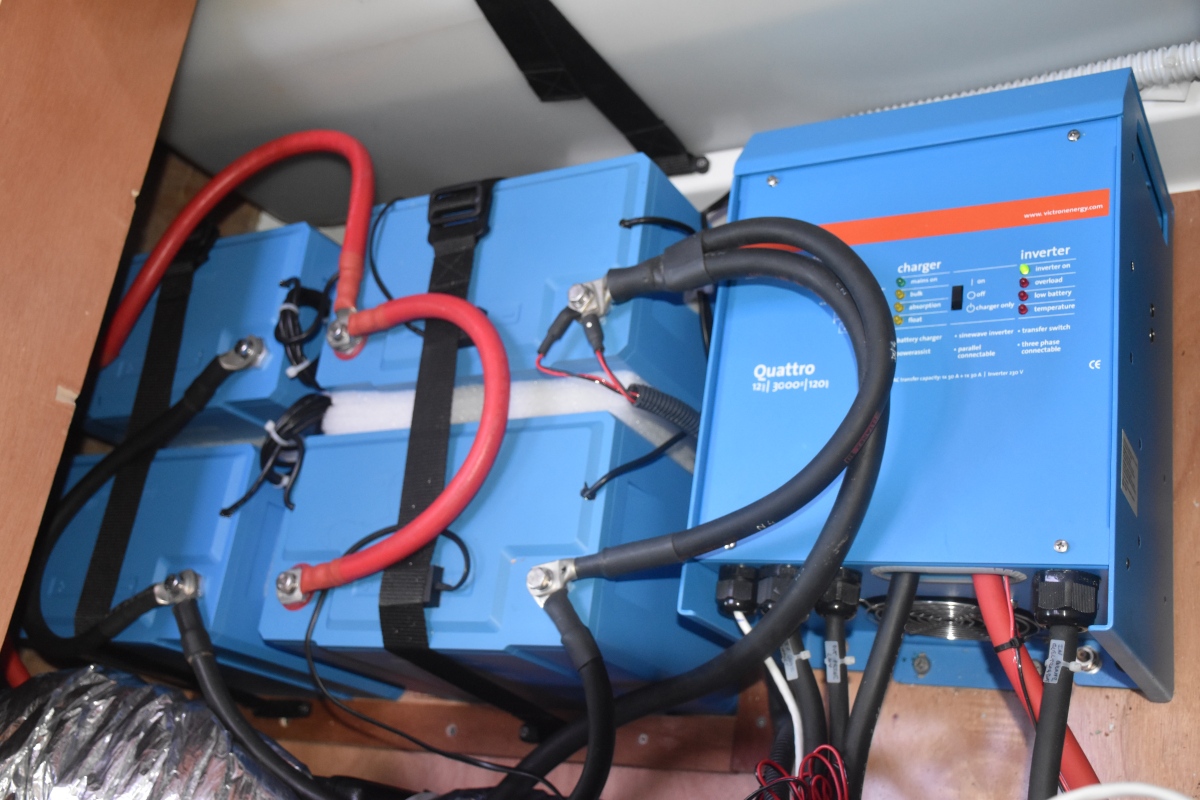 La Mischief came with four 120AH Gel Batteries that were failing fast. It was disappointing to see that they lasted less than 3 years, but the first winter in Yacht Marine caused some issues. And 480AH in total was a bit undersized as La Mischief is somewhat hungry on the electricity front, often chewing through 25A of juice at times. I had increased the solar panels to 1000W to try and compensate but I was fighting a losing battle.

After much research, I decided it was time for some Lithium batteries, LiFePO4 to be exact. I settled on four 90AH Victron LiFePO4 batteries, which we calculated to be just enough as Lithiums can be run down to 20% quite comfortably. Having now installed them, I’m still not entirely convinced  this is enough as I’m finding I still have to run the genset in the morning for 30 minutes.  its is however going into winter so the solars don’t get as much of a run as they used to. Time will tell. 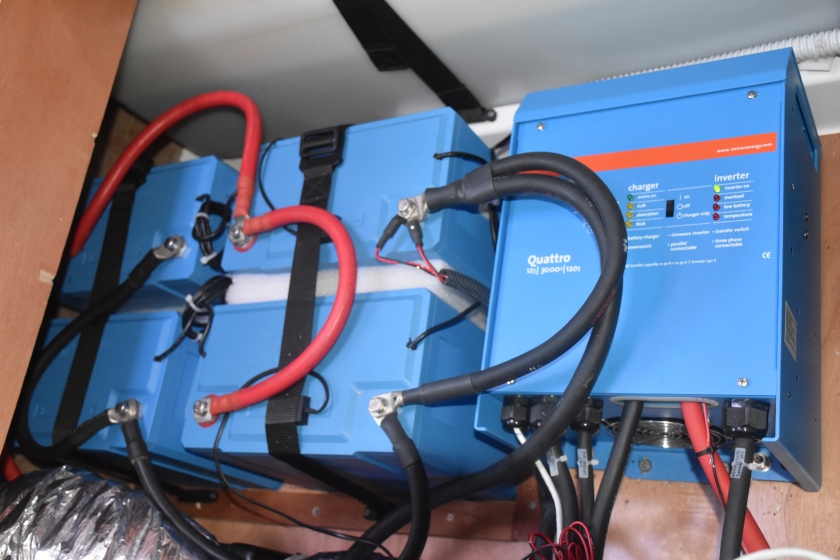 Fitting Lithium batteries is not just a simple matter of swapping out the old Gels with the new Lithiums. Sanli and his helpers spent three days completing the job, 15 hours in total. Luckily, we managed to find a spot at the publicly owned Town Marina, rather than having to pull into Skopea Marina, which is the least expensive of the very expensive private marinas in town. They weren’t keen on Cats at the Town Marina, but Dee managed to sweet talk them into letting us have a berth.

The Lithiums need their own Battery Management System (BMS), that controls the batteries as well as the Victron chargers and some relays to stop over charging and over loading. This BMS is a single point of failure so at some stage, I will need to pick up a spare.

The Victron Quattro Inverter/Charger needed a firmware upgrade to work with the BMS as the BMS now controls it’s charging behaviour, as well as shutting the Invertor down if the batteries get low.

The Victron Bluesolar 70/150 Charger also needed a firmware upgrade but to do this we needed a very expensive VE.Direct to USB interface cable (part number ASS030530000 for my future reference) that Sanli didn’t have. I will need to pick up in Oz. With the right firmware in place, the BMS controls the Bluesolar charger, but for the Victron rep in Turkey recommended that we stick a BMS controlled relay in to control the charging.

Battery monitoring is also an issue. I now have a Victron BMV700 battery monitor and associated shunt, together with a new Victron Colour Control GX Monitor. This Colour Control gets its information from the Battery Monitor and the Quattro. With the firmware update on the Blue Solar unit, I will be able to get the solar panel input on this unit as well.

However, I’m still not comfortable with my monitoring setup. The State of Charge can be showing 100% and I still have 150A going into the batteries. In the old days, I could use the Voltage of the batteries as a fairly good indication of their SOC but not with the Lithiums. They keep their charge high right up to when they start to go flat. I’ve been through the BMV700 manual and played around with the Peukert exponent and the Charging Efficiency factor as per the manual but still no luck getting the SOC to make sense.

The other outstanding item I need to get going is the wireless interface to Victron’s VRM Portal. From here, I can get email alerts and monitor the whole setup from my phone using Victron’s android app. I bought a Wifi dongle in Fethiye, but the CCGX didn’t recognize it so I need to get the Victron dongle. I will wait to I get back to Perth to pick this up. 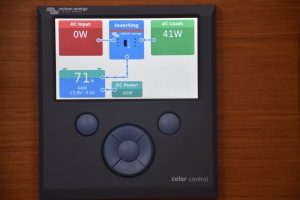 The good news was I didn’t need to change the existing (non-Victron) charging components from Christec and Mastervolt. All I needed to do was to place some BMS controlled relays between them and the new batteries, and the BMS took care of regulating the voltages.

Because of the complexities of the new system, I took Allan’s wise words of advice and left a couple of my old batteries in place, together with a battery switch so that in the event of a failure, I can simply switch across to the old batteries until I can sort out what the problem is, rather than having alarms going off everywhere in the middle of a night passage with no power. A very sensible idea. Allan’s been a great help as he has installed Lithiums on Camelot and I’ve been lucky to pick his considerable brain power in this area as he’s very much in love with his battery set-up.

After a few weeks cruising I’m starting to get my head around the new system. One thing I’m not sure about is the Load Disconnect function of the BMS. My understanding is that the BMS will automatically disconnect the Victron Cyrix Li-Load  Relay when a cell’s voltage drops below 2.8V. At one stage, I saw the voltage of the batteries drop to 11.9V, which worries me as I would have thought the Li-Load relay would have permanently tripped by then. The BMS should also shut down the inverter at the same time, but this was still running. Further investigation is required. In the meantime, I’ve set a low voltage alarm at 12.5V on the BMV700 battery monitor, so I can start the genie if I need to. Victron and Allan – expect a phonecall.