With our new batteries installed, we headed out for a couple of days to test them out. We spent a day on anchor in Twelve Islands once again and got in a bit of bottom cleaning in the clear water.

Then we headed over to Fethiye to get in one last meal at Pasha Kebab, do some shopping and of course catch some Rugby.

Australia were playing Scotland in the quarters and we managed to find a good sports bar to watch it on. Whilst there we ran across Hugh, who later agreed to come sailing with us. There was also a group of sailors who regularly winter in Fethiye and we hooked up with them for dinner after the Rugby. One of them happened to be Chay Blyth, who amongst many other feats was the first person to sail around the world the “wrong” way – west to east. My first taste of Yachting royalty. It was a great dinner with lots of frivolity as they kept getting into Chay citing the only reason he sailed around the world was because he couldn’t moor. After dinner, most of them went off for more bar hopping, whilst we walked back to the marina with Chay for a cleansing ale at the marina bar. At this stage I was picking Chay’s brain for all it was worth until he finally got a bit sick of all my questions. During the course of our conversation, it also came up that he tried to buy some land in Stroud in NSW, where Dad was born. Small world.

Back at the boat I filled in Dee on who Chay was via the help of Wikipedia and next morning we headed back to Gocek to allow Sanli to check out the battery installation one last time. We also needed to fix a leaky gauge on our water maker.

At the bottom of Turkey, the coast stops going south and veers to the East. So that was the direction we headed as we made our way towards Alanya, where we would check out of Turkey. We ended up getting away from Gocek quite late and headed off to Kalkan 35nm away. We made it at 1am after a beautiful night sail along the coast. 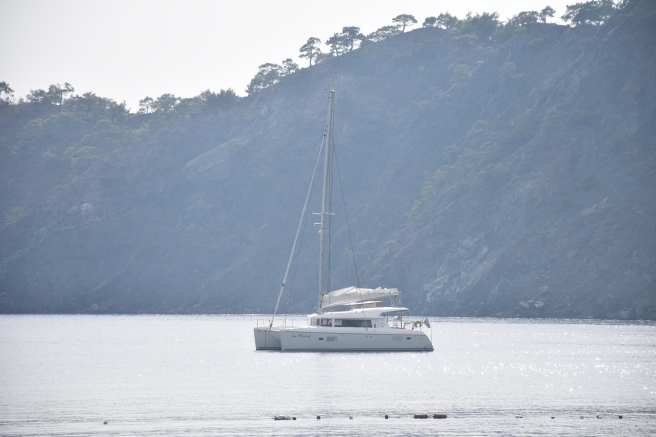 Next day the weather was still good so we put in 70nm to a small bay called Cavus Limani, which turned out to be a pretty good choice. We had tried to get all the way around to Port Genovese but ran out of daylight, so we did a sail past in the morning.

Next morning we headed over to Phaselis to check out the very impressive Roman ruins there. We anchored in 3m of water and dingied ashore to look over the impressive ruins with tall aquaducts, a nice promenade and a small theatre. Getting back to La Mischief, we had a short swim before the wind quite suddenly swung around into the bay and strengthened. We got the anchor up as the swell started to roll into the bay, making things quite uncomfortable. The weather we had been expecting was starting to roll up. The sail around to Kemer was quite short, but by the time we got there it was blowing 40kts. We were glad we had put in some long days whilst the weather was good.

The marina guys at Kemer were once again really helpful and jumped on board to help us tie up stern to. Then it was time to check out Kemer. The first stop was the marina bar, which was quite lively last year in June when I was there. Not this time – in late October – it was closed and the marina, although quite full was dead. Bummer! I was looking forward to the social life at Kemer.

We then hit the town and ended up going winter coat shopping. They were into their last week or two of a very bad season and the shop keepers were willing to take just about anything to get some cash in the door. By the end of the night Dee and I each had a new winter coat ready for when we come back for a European winter.

Next morning, it was up early to check the weather and see where we would head. Our original plan saw us going to Antalya and then onto Alanya, but there was some pretty bad weather coming our way the next day so we decided to make a run for it straight to Alanya, whilst the weather was still okayish.