We’d tried a few times to organize a berth in Larnaca without luck. Once the word “Catamaran” is mentioned, the “Too Hard” sign goes up and the Answer “No” comes back. However, whilst in Limassol, we did a bit of a reconnoiter by car and saw there was a few potential spots in the oldish marina that we could fit into. 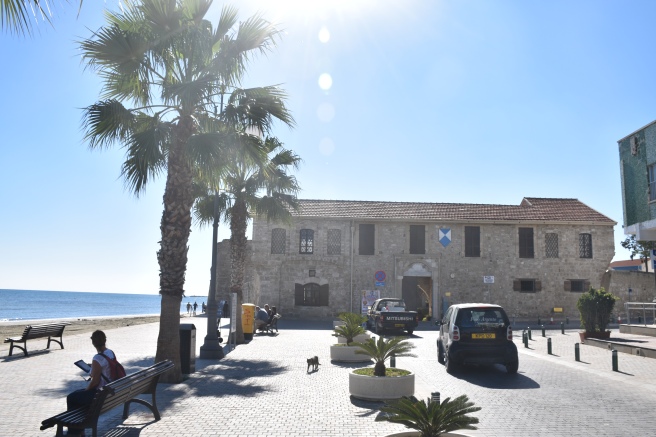 So we hatched up a cunning plan to just roll up and see what happened. We left Limassol earlyish and got to Larnaca about 2pm. After radioing in and getting no reply, we managed to get them on the phone. The marina was government owned and a bit run down, with no laid lines – just pylons that you back in between and tie off to. They directed us to one spot, which looked too tight and as much as we tried to fit, we just couldn’t. That was fun in 20-30kts of wind! We were then redirected to a much better spot amongst the tour boats, which was great, if a little noisy. The marina guy was really helpful (as are all Cypriots) and made sure we were tied up well on the pylons with water and electricity.

The other good news was it was incredibly cheap, being government owned and we found ourselves spending a few more nights than planned in Larnaca because of this.

The bikes quickly made another appearance and off we rode on the good bike paths to find a dive shop. We finally settled on Viking Divers, with Marco 1 and Marco 2 as our Italian dive masters. 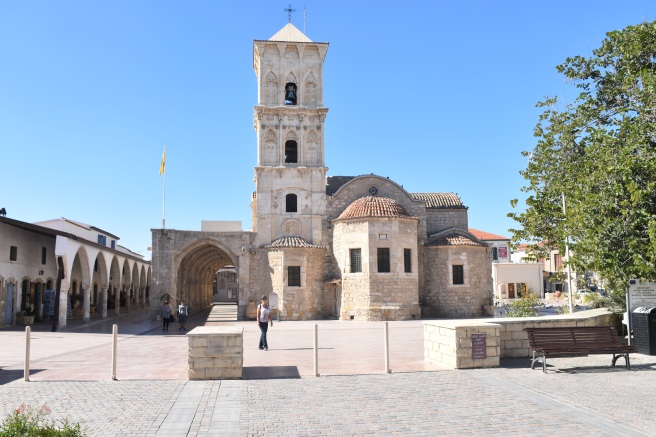 Since we hadn’t dived for a while, we decided to do a couple of shore dives before doing the Zenobia Wreck, the day after. The shore dives did the job, the second dive was really cool with some cave swim throughs and an exit through a little blow hole, which you enter through a cave underneath a rock ledge.

The Zenobia capsized and sank in Larnaca Bay in 1980, sitting on the bottom at 42 meters. It sunk due to a software error – bloody computers!!! …, which caused her computerised pumping system to pump excess water into her side ballast tanks. Down went its cargo of 100 or so trucks worth $400 million, which makes for an interesting dive. The Zenobia regularly appears in various world’s top ten dive sites and world’s best wreck dives so we just had to don wetsuits and see what all the fuss was about. 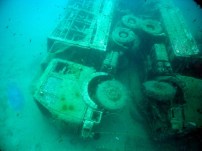 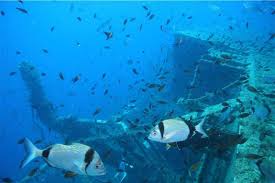 We went out on Viking’s dive boat, only a 10 minute ride to the wreck which is only a mile or so off the town.

They take all certified divers on the wreck, which is a bit unusual given its depth but you can get a couple of good 25m dives on the wreck, including some swim throughs. Advanced certificates allow you to go down to 30m and see a bit more. It was my first nitrox dive, which allowed me to stay down longer without getting bent. Unfortunately it didn’t stop me being a air hog and I ended up having to buddy breath with Marco so I could stay down for the planned duration. Daughter Claire had a good laugh on this one. I also had some ear problems due to a head cold that was just starting up so I had to miss the second dive. But the first one was great and definitely worth doing when in Larnaca. It was pretty good but not sure its in my top 10 dive sites, given all the diving I’ve done elsewhere.

In between diving, we had a nice wander around the town. There’s the obligatory castle right on the waterfront and some nice sandy beaches out the front of the town. Behind the beachfront there is some walking streets with shops, bars and restaurants that come alive at night, which at this time of the year is 4.30pm in the afternoon.

With diving done, it was time to leave Larnaca. We wanted to head to Famagusta on the occupied side of the island. We’d heard you could go from south (unoccupied) to north (occupied) in a boat but not from north to south, as the Republic of Cyprus (the south) will claim you did not enter the country at a legal port of entry and then proceed to impound your boat and deport you (there is a boat on the hard in Larnaca that has been impounded).

So we went and saw the Marine Police and enquired about going to Famagusta. He was not very happy about it and pointed out the fact that we could never come back, which we could live with. However the Customs guy said he couldn’t give us a clearance out of Larnaca if we were going to Famagusta. He also said we could be picked up at sea with some nasty consequences.

A quick conference back at the boat determined that we would tell everyone we were now going to Turkey. Back at the Marine Police and Customs, they were most relieved with my change of plans and gave me the necessary clearances.