​Apologies for the long post but it is Venice !!!

We checked out of Pula Marina just after 2pm and went over to the Customs and Immagration Dock. Checkout there was really easy and quick and then we were soon on our way.

We put up the mainsail, but the wind dropped off to nothing. You could tell we were going to Venice by the dirty colour of the shallow water. (20-30m). It was a milpond out there as we slowly motered across to Venice, 70nm away. We all dodged ships and fishing boats that littered the way on our 2 hour night shifts.

We reached the channel into Venice at 7.30am and got ourselves aquainted with some very busy charts. Once inside, it became much clearer despite all the new breakwaters and a new lighthouse on the outside.
There was quite a current running as there’s a 1m tide in Venice, something unheard of in the Med.
Sailing into Venice, A La James Bond in Casino Royale, has been on my bucket list for some time and it was exciting to tick this one off. 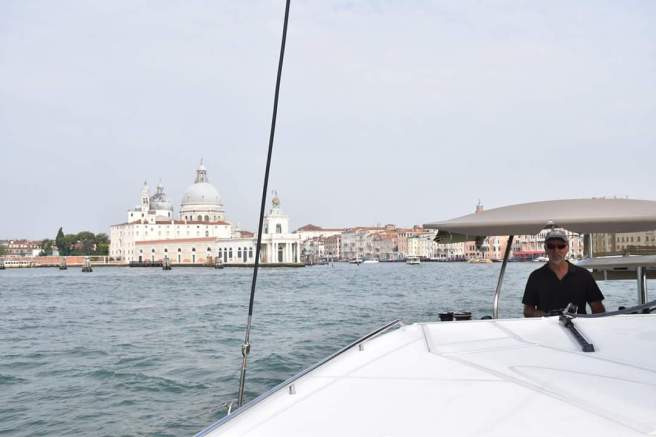 We were heading for the marina at Compagnia Della Vela on San Georgio, a marina recommended by the really nice Italian guys we met in Molat from the Savento Sailing Team.

We arrived at San Georgio, right opposite St Marks Square a little early and we took the opportunity to do a little sightseeing from the water before heading into the tight entrance of the Marina.
Because of the tides, the marina was set up with poles for the monos to slide in between and tie up to. There was one space where a cat could go and we were extremely lucky to score it.

Safely tied up, it was off to see Venice. The water bus cost a cool 7.5 euros for a one way ticket, the most expensive public transport I’ve been on for a while. We ended up catching it all the way to the bus/train station as this was nearby to the frontier police, who checked us into Italy. And for 0 euros. Beautiful! 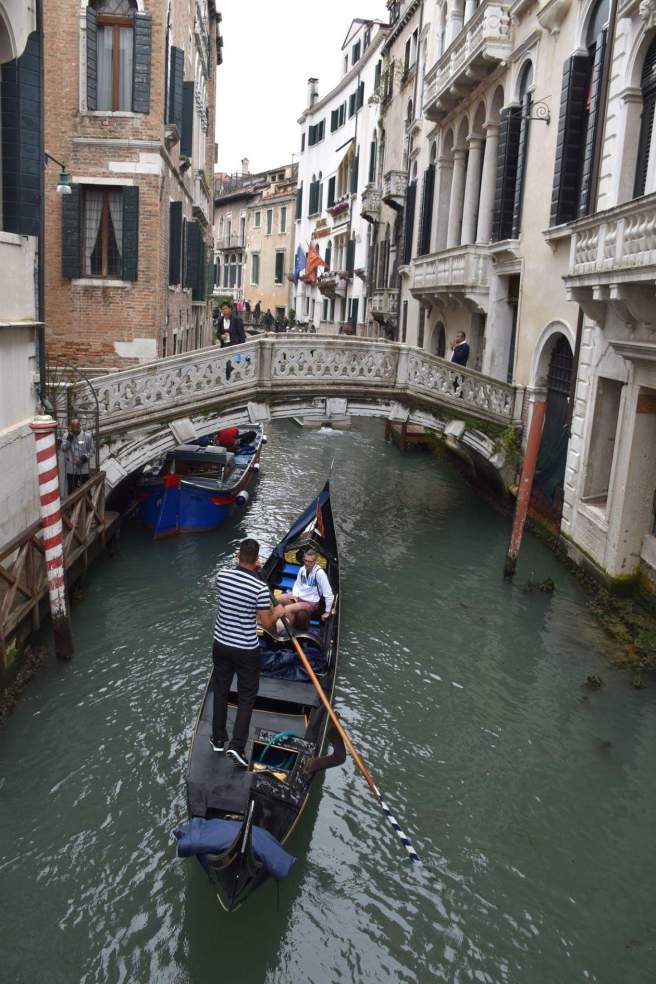 The rest of the day was spent getting a SIM card from Wind, getting pizza and wine for lunch at a cute little sidewalk cafe, and aimlessly wandering the streets and canals of Venice, seeing what popped up around the corner. We had read SV Golden Glow’s Blog and they had some great info on Venice including how to get some temporary licence plates for our dingy to be able to cruise the canals. Unfortunately the authorities had changed this in February this year and we are not able to do this in A Little Bit of Mischief. Bummer!

After an overnight leg the night before, we returned to the boat and had a quiet night watching a movie over a few drinks.

Day 2 in Venice started off rainy and overcast. Refreshed after a good night’s sleep it was off to St Marks Square to start the business of knocking off all the sights. The Doges Palace is still amazing, amazing no matter how many times you visit it. I’ve finished reading the history of Venice and it puts it all in context. I won’t bore you with the rest.

We started Day 3 by farewelling Stevo as he made his way to the airport. Then it was off for some more exploring. We’d booked our Basilica “No Queuing” Ticket for 4 euros each online and that got us in at 9.45am. The Basilica is one of the most magnificent churches in Europe, dripping in Gold and fantastic mosiacs and paintings. You can see that the church in the height of the Venetian Empire was the beneficiary of lots of its wealth.

We then had another crack at getting a temporay dingy license to cruise the canals. This time the Tourist Info Office directed us towards the City Hall and after being bounced around several offices and ending up at one that seemed to know what was going on, only to be told it was no longer a municipale responsibility but has now been transferred to the regional government, one hours bus ride away. Back at the boat, I read an email from Ellen who said a girl at another marina could organise it, but when I rang her she talked about organising it through the Tourist Information Office, but not before we were leaving. It was time to put up the white flag. 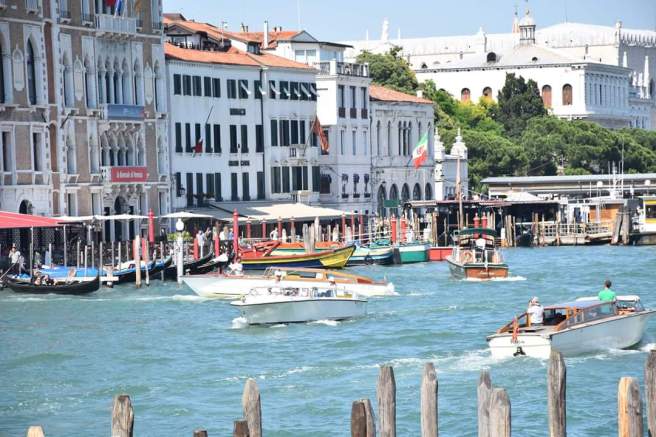 We hopped on the vaporetto up the grand canal to see all those magnificent houses and palaces using good old public transport. We hopped off at the Daniela Hotel, which we found out about the previous night when watching the making of Casino Royale, the house that sank was based on this hotel with its magnificent interior. 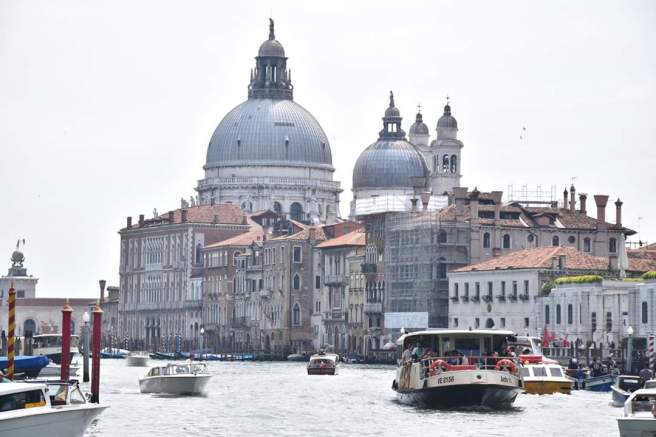 We then walked up to the Arsenal to see where the real power of the Venitian Lion came from – the shipyards that build the naval fleet that dominated the Mediteranean all those years ago. We then hopped on another couple of ferries to continue our exploration of the waterways and canals. The multi-day tansport ticket was proving to be very useful as we hopped on and off at quite a few places.

We hopped off at Salute and admired the wonderful church and then wandered the interesting streets that are found around the Peggy Gugenheim Museum. With the sun shining, it was too good a day to stay inside.

We started our last day in Venice by catching the Vesporetto around to the Frontier Police to check out of Italy. Good to get this one out of the way early.

Then we set about seeing what remained on our To Do list.  We loved just walking around Venice, checking out all the nooks and crannies. My phone told me we did a couple of 14km days.

We wandered up a great shopping street just north of the Grande Canal and ducked in to see the Church of Madonna dell’Orto.  The churches of Venice are pretty damn impressive.  Then down to the long street again to see some of the impressive palaces on the Grande Canal. We found a nice nook and stopped for a pizza and some wine, before heading to the Rialto Bridge  via some more interesting streets.

We crossed the bridge and headed for the Santa Maria Gloriosa del Frari. As we got closer the rain started coming down in buckets and we retreated to a café for wine and cappuccino. Two drinks later, the rain abated and we made it to the church (on time). Its spectacular in its shear size and its marvelous paintings, sculptures and its pretty cool altarpiece by some dude called Titian. What caught our eye was a sculpture deplicting black slaves, a quite haunting commentary on the wrongs of slavery. Good on the old Franciscan monks for taking a stand a long time ago because slavery was something the Venetians of old used to trade in.

We were on a roll and the last stop of the day was the Ca’ Rezzonico, a beautiful palace on the Grand Canal from the 1800’s. Its an interesting look into what living in a grand Venetian home was like in the last days of the grand Republic, decked out with18th century furnishings and paintings.

Then it was off to Harry’s Bar. Unfortunately it had just ticked over 6pm so my shorts were a problem. So back to the boat for a shower and a change. Whilst on the Island of San Georgio we checked out the impressive yacht club we were staying at but unfortunately the season was a few weeks off and the weather was bad so the bar and restaurant was deserted. 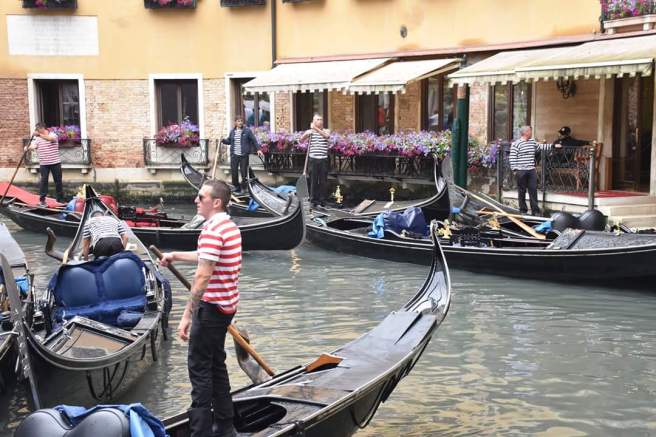 Not to worry, they had another club restaurant on the main island, just off St Marks square with an amazing view back to San Georgio. This was the site of their original yacht club and we had a great 5 star dinner there for about a third of the price of the other restaurants huddled around St Marks.  Afterwards we walked around to Harry’s Bar but it was closed. 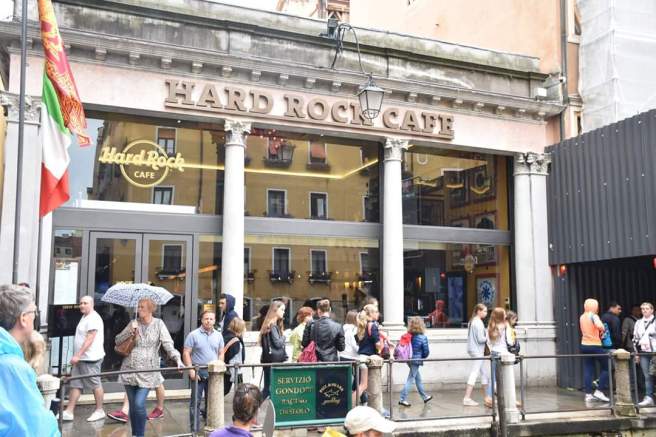 Never mind, it was getting late and we headed back to the boat for our early morning departure back to Pula in Croatia.