After a leisurely breakfast, we pulled anchor and headed out. This time we had to head SW to get around the headland before heading the last little bit to Pula. Along the way we hit water so glassy we could see the reflections of the clouds in the sea.

The entrance to Pula is rather interesting. We had to sail 1nm north to skirt around old disused jetty. Then we sailed into the large bay and past the oldest surviving ship yard in the world. 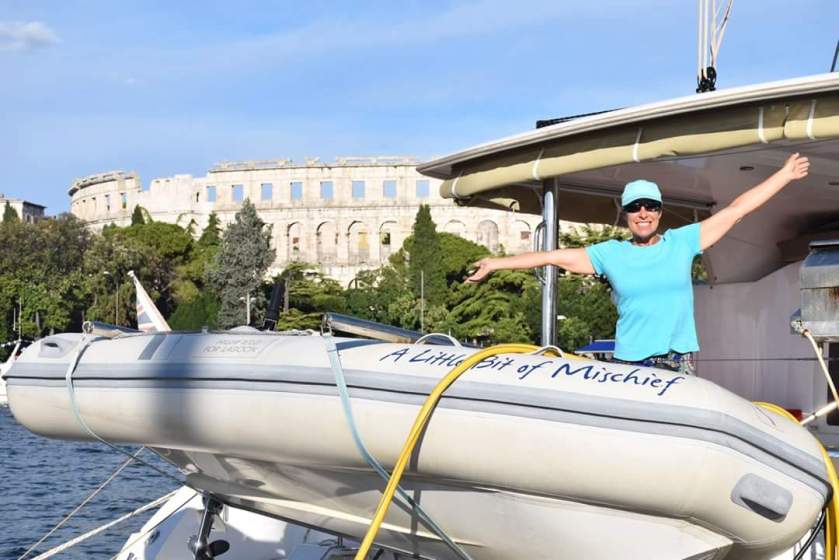 We considered anchoring near the customs jetty but in the end went to the Marina as we needed to get our wind instrument attended to. Our resident electrician got only so far before pointing out the demarcation that meant we needed an electronics guy!!!

The marina cost us 94 euro a night all inclusive – not too bad by Croatian standards. And it was right in the middle of town.

After finding a Raymarine guy to attend to our non-responsive wind instrumentation (booked in for tomorrow), we checked out the impressive Colosseum, second only to the one in Rome.

Then we walked around the cobbled walking street to the Temple of Augiustus, some pretty impressive Roman Mosiacs, the Triumphal Arch of Sergius, the morning markets and up to the Fortress with its great view and Nautical Museum. Unfortunately, we didn’t have time to do the underground tunnels. Pretty interesting city.

Then it was back to the boat for some pre-dinner drinks before asking the ACI Marina staff where to eat. One of them gave us a lift to a non-tourist restaurant 5km out of town. The Istrian Steak was really nice but lacked a certain amount of ambiance right next to the highway.

Back at the boat, we sat waiting for Pula’s latest attraction, a stunning lighting display at the city’s circa 1856 Uljanik shipyard, one of the world’s oldest working shipyards. “Renowned lighting designer Dean Skira has lit up the shipyard’s iconic cranes in 16,000 different colour schemes, which come alive four times every evening on the hour, starting at 9pm for 15 minutes.”

Then its time for bed as tomorrow we head for Venice.