For once we had a nice sail down to Vis, stopping for the night in one of my favourite turquoise blue anchorages – Krknjas on the island of Veli Drvenik. 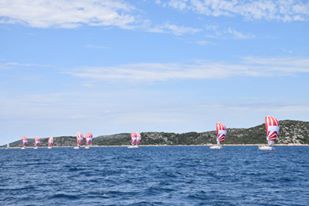 But we were on a mission to get to Vis then onto Italy so it was up anchor and onto Vis. We got to Vis around lunchtime and picked up a paid mooring in Komiza.

We spent a day and a half in Vis, waiting for the right weather to cross to Italy. We swam from the back of the boat and at the nice beach, and between the two. We walked through the nice town with its cutesy marina and nice waterfront promenades. 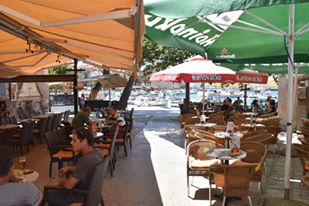 We took the dingy inside the restaurant we’d visited with Ooroo three years ago and had another nice meal overlooking the water. It was all very relaxing.

Then we checked out of Vis and set off for Brindisi – a day and a night and a day away. 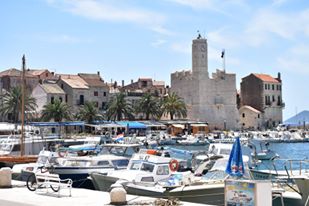 The weather was overcast with light winds. We got the genneker out and had some success using it with one motor running to give us some speed. Then the wind dropped and went on the nose so we furled in the genneker and motor sailed towards Brindisi.

As night fell, Dee went to bed and I watched the lightening on the Italian coastline. I watched a few squalls on the radar, and being 5nm away and somewhat behind us I thought it would take them a while to get to us and thought we could pass by them before they hit us.

Then they were on us. I got Dee up to help reef the main as the wind picked up from 5kts to 35kts in a blink. As we were reefing down the main to the second reef, the dreaded genneker start to unfurl. Yikes.

By now there was quite a swell running making steering a bit difficult. I headed upwind to stop us taking off and stop the genneker unfurling any more. Dee wasn’t keen on this as it took us into a heap of lightning but there was no way we could run away downwind with half a geneker out in 35kts of wind and a large swell. So we tried to ignore the spectacularly scary lightening show as I clipped on and went forward to pull the genneker down as Dee tried to steer whilst lowering the halyard at the same time, letting the geneker fall safely along the length of the boat.

Having made the mistake of leaving the genneker furling up on the bowspit once before in Cascais, Portugal and having the same problem, I was a little bit more equipped to deal with the issue. But I absolutely hate making the same mistake TWICE!!! Mistakes are usually a learning process but this time I got a big fail.

As the genneker came down it managed to knock the Badboy Wi-Fi extender aerial off the spreaders. I somehow managed to find this on the coach roof, but the fall damaged it beyond repair. Once in port we evaluated the damage and couldn’t find the swivel for the top of the sail. We thought it must have come off after I removed the halyard as the top of the sail fell into the water as I was putting it away in the front locker. We ended up buying a new one before finding that the old one had fallen off in the bottom of the locker and had hidden itself under the sail. The whole f***up cost us a few boat dollars.

But I will be much better prepared (well ahead of time) for squalls next time.

With the genneker now down, we found a wind angle that worked and comfortably sailed through the storm to Bari, a little short of where we were originally sailing – but hey we made it to Italy.