10 minutes before the start we put up our parasailor and hit the line at 12.02pm. We’d like to think that we were first over but others a little more objective than us controversially disagreed. Anyway its not a race!!! 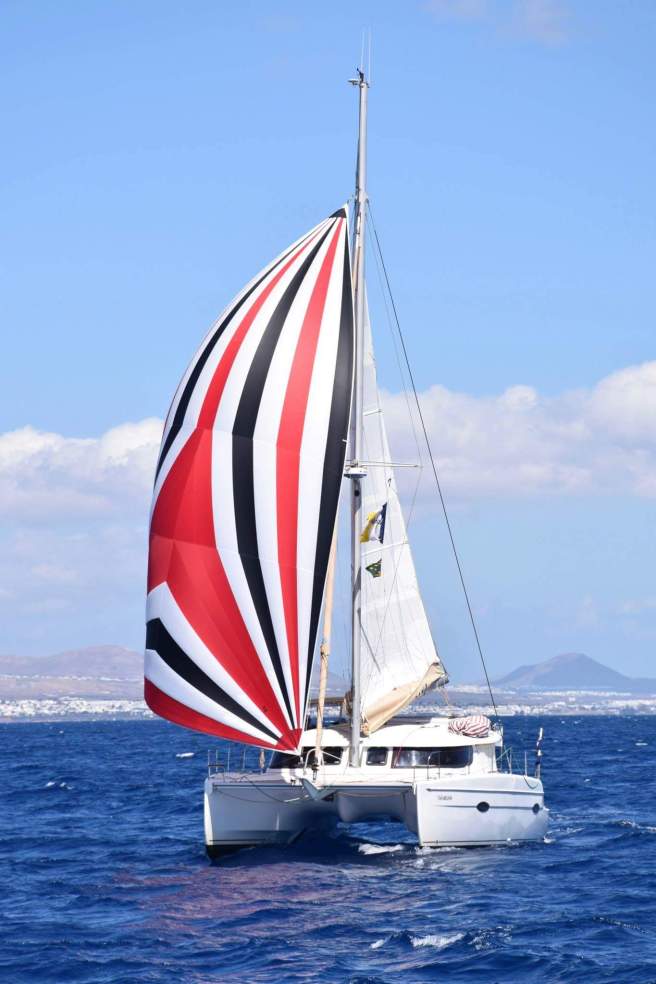 We enjoyed being out in front for a little while until we fell into a gaint wind hole and the whole parasailor came flopping down. We ended up bagging it before it got stuck on radars etc. which meant we slipped down the field to fourth last. Then the wind picked up a little and we flew it again. It was hard going with the wind all over the place but this time we managed to keep it flying. As we slowly got closer to the bottom of the island the wind picked up a little and we managed to pass most boats except for the two fast cats (Catana 50 and Outremer XL5). 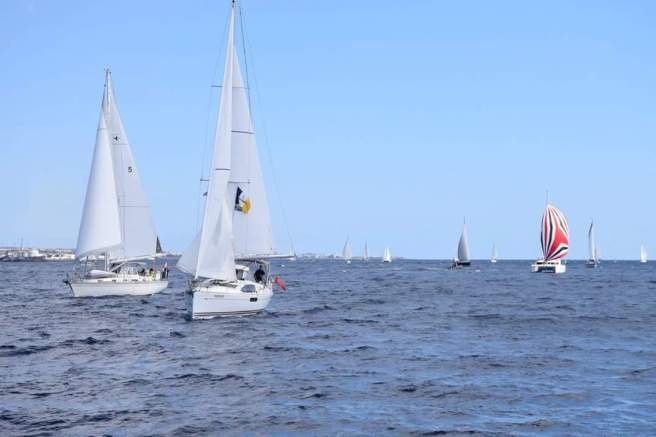 Passing between the bottom of Lanzarote and the top of Fuerteventura, we just couldn’t get enough angle and ended up sailing too close to the coast of Lanzarote as the wind bent around the mountains. We could see the whitecaps of the NE winds in front of us but couldn’t get there. Meanwhile the rest of the fleet had a much better angle through the islands. So down she came again whilst we motored across to the wind. Up went the parasailor but this time we couldn’t get enough angle the other way and were heading straight towards Fuerteventura. So down she came, which wasn’t a bad thing as the wind was starting to pick up.

We had a bit of a delay in getting the main up whilst a freighter went past, but when we finally did we were down the back of the field again. No worries, as we had a great reaching angle and with one reef in and the wind blowing 18kts we were doing 8.5kts. Champagne sailing.

As night approached we reeled in a few boats before the wind dropped a bit and swung more behind us. We took the reef out and still did 5-6kts. It was strang sailing in such a big fleet. Trying not to gybe whilst picking a path between boats was tricky, especially when a few of the boats did not have AIS. Interestingly our radar lost them from time to time even though they were quite close.

About 8.30pm we lost a pin out of our main sheet shackle but we didn’t need to stop and repair it as the winds were light and the block settled against the other two blocks on the traveller without pulling out. Just so long as we avoided any sudden gybes we were right.

We were running 3 hour watches between the 3 of us (especially good since Jimmy said we need 6 hours of sleep in one block to function on extended passages) and as the sun came up at 7.53am we were nearly at Las Palmas. There was quite a line up of boats waiting to get in so there was some waiting involved as we finally tied up on T jetty amongst the 34 other rally boats.