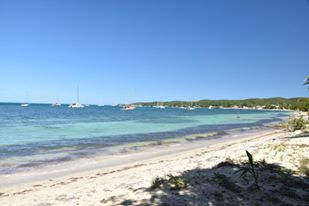 Going East into the trade winds is slow going.

We finally made it to the anchorage at St Louis at about 4pm. We picked out our anchorage not far from Balenac and pondered the fact that the water was not as crystal clear as the Cruising Guide suggested. Nice but not exceptional.

We saw Balenac on shore – they had just got back from hiring a car and they told us about the Rhum Factory, where the Rum flowed freely. Given the next day was a Sunday, we decided to walk the 5km to the factory – a bit of morning exercise. We arrived at 10.30am and had a look at the factory, which being Sunday was not operating so we wandered around by ourselves. Then we returned and tasted a few rums, which weren’t bad. My backpack got a little heavier for the return leg, having purchased a 59% knock your socks off white rum – the Labat 59.

The walk back along the beach was a bit longer but much more pleasant. Being Sunday, St Louis was dead so we made the snap decision to pull anchor and head for the main island. We thought we may be able to point as high as St Francois, but in the end we had to settle for St Anne – there would be no tacking this late in the day!