We got back to St Francois and enquired about our friend Jean-Roch, who had been hit by a local fishing boat whilst snorkeling on their boat Teiva’s anchor. He had a deep gash on his arm from where he had lifted it to protect himself from one of the two propellers, plus bruising on his torso. He is probably a little lucky to be alive, it could have been far worse.

Gilbert and Isabelle had done a sterling job helping out, dinghying him and Marie-Claire to and from shore for their hospital visits; and looking after their young son, Theo.

We invited them all over for drinks on La Mischief and Jean-Roch was in fine form, getting stuck into Marie-Claire for her dinghy driving skills. They had worked out a system where Jean-Roch started the dinghy with his good arm so that Marie-Claire could drive. Lets hope it works okay as they will be staying put for quite a while. Gilbert and Isabelle came also and we did a fine job of sampling the rum we picked up from Marie Galante. Yet another fun night with our Gallic friends.

And it’s a good wake up call for the rest of us to make sure boats see us and we see them first.

We left Sainte François at 7am heading offshore to Iles de la Petite-Terre, some 14nm away. We needed a few tacks to get there and we noticed all the day catamarans motored up the coast and then cut across to the Islands under sail, a sensible and scenic way to get there.

We got there around 10.30am and we were confronted with a series of breaking waves over the 2m bar that guarded the only entrance into the lagoon. It looked reasonably scary, even with Chris Doyle’s waypoints and mud map (which turned out to be excellent).

As luck more than good planning would have it, one of the day catamarans arrived shortly after us and we decided we would follow him in. But not too closely as we didn’t want to surf up his bum. Even with a guide boat it was still exciting, as at one stage Dee goes “go, go, go” as the breaking swell threatened to catch us. With the two 75HP engines foing at full tilt we were able to run with the wave as it slipped under us. Then we were in.

With a reasonable strong current running through the mooring field, we had trouble picking up one of the National Park moorings until one of the tour boat guys came over in his dinghy and helped us tie on. Then we went for a swim to explore the island. Whilst on the beach we saw a small sand shark swim by and numerous turtles. Back at the boat, we saw a single-handed Polish two ended ketch come in and proceed to the shallows where he got stuck aground. We dinghied over to offer assistance and went off to find the ranger to help pull him off. He claimed his guide-book showed an anchorage there. By the time we got back to him, he had managed to reverse out of his predicament and was busying his anchor. There’s no anchoring in the lagoon as the National Park has provided ample numbers of moorings so we told him no and helped him on a mooring. Next minute we hear shouting from the day catamaran as he has got his spear gun out to catch himself lunch. I’ve got to say that his Polish Guide book is a little out of date perhaps. 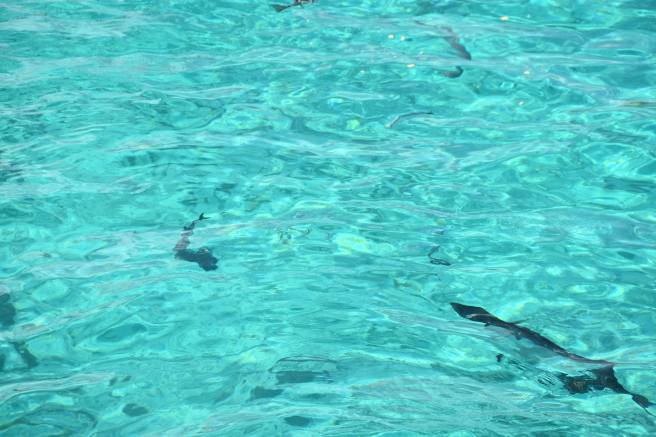 Dramas over, we got our snorkels and fins on and went exploring. Before we could even jump in we saw a barracuda, a couple of large jacks and a box fish off the back of our boat. This continued for the rest of the snorkel with another barracuda, a large sting ray and lots of reef fish and coral to look at.

Later in the day, we took the dinghy in and went for a nice sign-posted hike around the lighthouse and out to the western point. Got some nice photos of the view, and the ten million iguanas that sun themselves on the path.

As darkness fell, the fish came out to play. There was a bit of a current running through the mooring field and a school of large fish camped themselves beside the boat and gently swam against the current, occasionally snaffling smaller fish that floated past. Fascinating. We tried dropping a camera over the side on a selfie stick but it was just too dark to pick up anything.

Then at about 8pm we saw a small catamaran come over the bar and into the lagoon. Pretty gutsy (or possibly stupid) effort.

Next morning, we woke to a calm sea with not much action on the bar. This had a huge calming effect on the skipper who quickly ordered stumps to be drawn and off we went across the bar with minimal excitement, heading back to St Francois, via the scenic route along the coast. 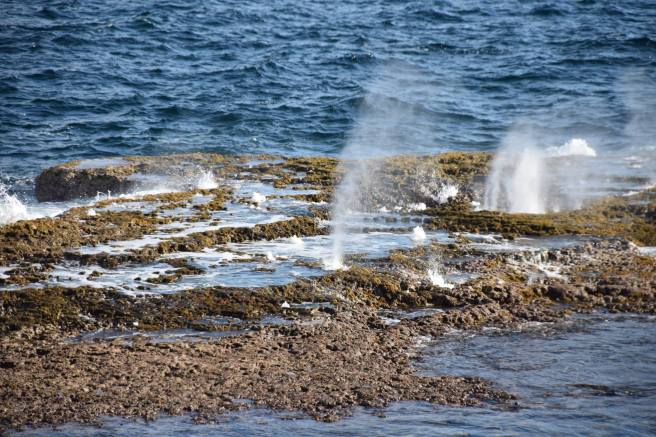 You feel like you are in the tropics when you motor through a gap in the coral reef and drop anchor in the sheltered lagoon in 2m of crystal clear water with nothing but sand everywhere. Tropical Paradise. St Annes on the south coast of Guadeloupe. The anchorage to the West, which is the place to be is small, but with a cat we could get quite far in and we managed to get a great spot, right next to the blow up water park.

After a quick swim to check the anchor, we dinghied a short way West to the town fishing harbour, which was a bit rundown and smelly, but otherwise a good place to leave the dinghy. Then we walked back East on the beachside broadwalk, past our anchorage and into town. We checked out all the street vendors, selling knick-knacks and deliciously smelling street food, stopping off at a beach side bar with some great music.

Next day, we hopped into the water for a much longer snorkel, and walk along the beaches. We loved all the full restaurants and bars that spilled out onto the beach front. It’s a very popular beach resort town and the various beaches were all packed.

Exercise over, it was back in the dinghy and into town for some internet and mojitos at one of the bars. Loading photos is always a good excuse for a mojito!

In the afternoon, we walked around to Club Med, which is in the next bay East. They have the whole bay with a beautiful beach, quite spectacular. There’s a small anchorage out the front, but we agreed we liked being closer to the colour and movement of the St Anne’s township.

Next morning we decided to change genders and head to St François, a very, very popular anchorage, 8nm further west. We followed the instructions in the guide-book and made our way through the marked channel, right into one of the most beautiful anchorages I have seen. But it’s no secret and there were lots of boats in there as well. After a bit of a motor around we found a spot and dropped anchor in sand in 2m of crystal clear water. 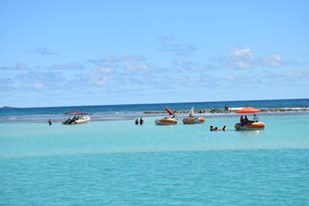 We were right behind a small sandbar, with a few doughnut BBQ/Drinking boats floating around in front. The occasional windsurfer or kite surfer made their ways around us. Also in the anchorage was Gilbert and Isabelle; and Jean-Roch and Marie-Claire. It was good to say hello again, although it was Valentines Day so we were all doing our separate things, being the romantics that we are (Well they are French and some of it surely must have rubbed off on me!).

Dee and I headed off to check out all the restaurants for V Day and settled on a beachside restaurant where we had a nice view out a window to a guy filleting loads of lionfish. Dee was there in a flash checking out how to deal with this invasive species.

After a few days of snorkeling, paddle boarding and checking out the cute little town, we decided to push on and head for Iles de la Petite-Terre.