The sail down to Kekova Roads is quite impressive. There are a couple of small gaps between islands and the mainland to squeeze through, the last of which pops you out into Kekova Roads, a superb sheltered cruising ground.

Our first order of business was to check out the partly sunken ruins of Dolchiste on Kekova Island, an ancient town, which was destroyed by an earthquake during the 2nd century. You do this by sailing close to the island and peering down into the water as well as peering out onto the island itself.

Then it was time to head to Kaleköy, known to the Turks as Simena, a delightful small village with the partly sunken ruins, underneath a very, very, very impressive Crusader castle. Its charm is further enhanced knowing that access to the village is possible only by the sea. It’s probably my most favourite place in Turkey.

We pulled up on one of several restaurant piers at the front of the village, right next to a Lycian tomb sitting in a metre of water. You get the berth for free on the basis that you eat in the restaurant. Fair deal.

Next day, we went up and explored the castle and all the little stalls selling the usual carpets, cushions and trinkets. Really nice village to wander through.

Next day we went around to Gokkaya Limani and anchored in 10m of water. Like a lot of the Turkish coast round these parts, you get cold water flowing into the sea making swimming interesting as you swim from a warm bit to a cold bit and back to a warm bit etc. etc. 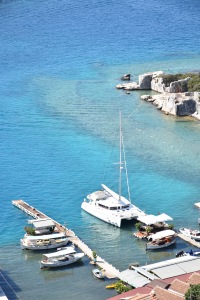 We did the obligatory dingy tour and checked out the disco that’s up a small river in the middle of nowhere (only open on Tuesdays evidently and it was one of the 6 other DOTW). We drove our dingy into a small cave – that was fun and up another small river.

With our wilderness experience over, we headed back up Kekova Roads. I dropped the dingy over the side and Randy drove Dee and Toma along Kekova Islands to get a much better view of the ruins, whilst I toddled along in La Mischief, picking them up at the other end.

Next stop was Üçağız, which means “three mouths”, referring to the three exits to open sea. We anchored right next to the Lycian Tombs of the ruins of ancient city of Teimioussa. Ucagiz is where all the gullets leave from to do their daily tours of Kekova Roads. Another cute little town to tick off.

The water isn’t the best in Ucagiz so we pulled anchor and headed back to anchor off Kalekoy amongst all the turtles and right next to the partially submerged Roman baths, where we attempted to get the money shot of La Mischief anchored in front of a beautiful castle. 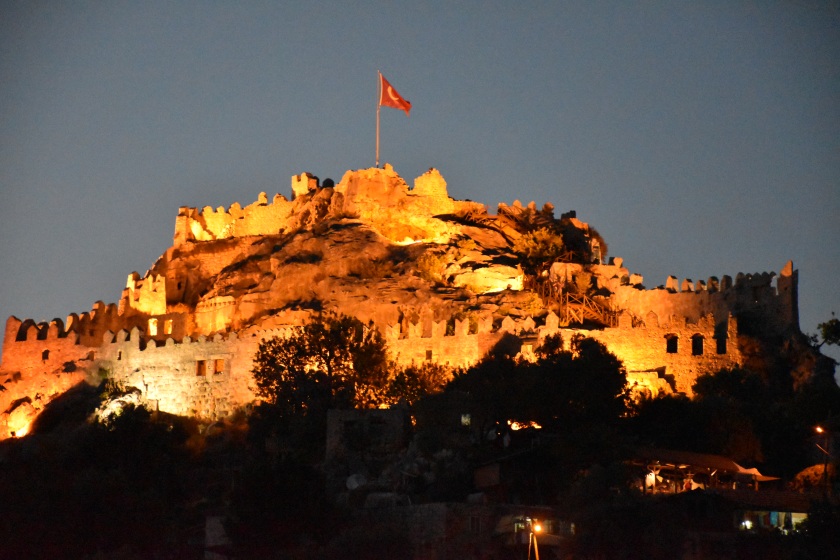 Kalekoi was just as good the 2nd time.

After our first full sail after the mainsail had been fixed, we arrived about 6pm, just in time for a delightful dinner on shore on a picturesque spot over the water.

Next day, it was time to check out the castle and the village.  it turned out to be another epic photo session with Ewa, who seems to take better photos than me just with her iPhone. We managed to get to the field of sarcophagi  this time and it was interesting wandering through an ancient graveyard. The sarcophagus’ lids are shaped like an upside down boat as most of these people were fishermen and this signified the end of their fishing days.

Then it was off to check out the sunken city and find another bay. We headed west towards Poleos Buku and passed a beautifully restored luxury yacht called Nahlin. Worth googling, we quickly found out it was owned by Mr Vacuum Cleaner, aka James Dyson, and is one of the last of three large steam yachts constructed in the UK. It’s also the largest British-owned super yacht at 91 metres, and was ranked 36th in a 2013 survey of the world’s 100 biggest yachts. There you go.

Much, much more interestingly though was the fact that it was chartered by King Edward VIII and used by him and Mrs. Wallis Simpson to get up to some rather serious Mischief (oops, did I start that with a capital letter). First thing he did was rip out the library so he could fit more grog on board. This was evidently the trip (to the Adriatic) where the press got wind of this royal mischief and soon after he abdicated.

After our dalliance with history, we decided the bay wasn’t much chop and it was time for some downwind sailing to the other end of Kekova Roads and Gokkaya Limani. Sailing on the inside passage was delightful and in no time at all we were at our destination for the night.

Safely anchored, we hopped in the dingy for a bit of a sightsee up the creek and into the pirate cave. This time there was a gullet there so we let him go first and he popped his whole nose inside. We dingied in around his so we were both inside. Wow.

Next day after a morning paddle board, it was up anchor and off to Kas.

The cruise around from Kas to Kokova Roads was very scenic. There are a couple of “holes in the wall” to get through and a few good looking bays along the way. There was a slight swell left over from the gale and the wind was a bit fluky as we past by several islands and headlands. We managed a bit of a sail along the way but still had the motors on for a couple of hours.

Kekova Roads is a long island, protecting a wonderful cruising area. As we passed through the last of the narrow passages that separated Kekova Roads from the mainland, we caught a glimpse of the crusader castle at KaleKoi. Stunning.

But first we needed to follow the gulet trail and motor along the very edge of Kekova Roads, sometimes as close as 20m to see the famous sunken city of Simena, the result of a severe earthquake in the 2nd century AD. We had to motor along as it is forbidden to anchor or swim here. Despite the earthquake, you can still make out steps and arches and bits of wall and we could look down into the water and see what remains of ancient walls. Fancinating stuff.

Next stop for us was Kalekoi and we needed to squeeze into a small anchoring area amongst the large gulets. We had 3 goes at trying to get enough swing room but these gullets seemed to set themselves at old angles to the wind so we gave up and tried to find a nearby anchorage.

Along the way we were treated with many turtles popping their heads up to say hello. 1.5nm away we found the perfect bay and as we rounded the corner 2 gullets cut inside us and raced to get the remaining anchorages.

So back we went for another shot at anchoring outside Kalekoi. This time we found all the gullets leaving so we had the choice of the anchorage. And this is where we stayed for 2 nights, watching a parade of gullets swing past the castle, as part of their follow each other around Turkish Disneyland whistle stop tour.

We found there were two types of sounds coming from these gulets – either commentary (in everything but english),  or the single variation doof doof music, for the less culturally aware crowd. The dress code was either overdressed Japanese or the underdressed Euro crowd. Very entertaining people watching, starting about 9am and finishing about 4pm.

This content procession of gulets made swimming and paddle boarding somewhat challenging, but both were an excellent way of checking out the turtles.

The castle was the main highlight of Kalekoi and off I went to check it out. The town was a bit of a rabbit warren of thin walk ways criss-crossing the side of the hill but I eventually found the right combination of tracks and made it to the entrance where I paid my 10TL and wandered in.

Other than the castle walls, there wasn’t much left – a true renovators delight. The view was fantastic and you could see why the Crusaders put down a deposit on this patch of land to build their dream castle, with million dollar views up and down the approaching seaways. Looking around I could see a field of sarcophagi off to the side. Off to the other side next to the harbor in the shallows there’s also a single sarcophagi – which made for a brilliant photo opportunity later.

The castle was surrounded by Roman Ruins and within its outer grounds there was the cutest little Amphitheatre you ever did see.

And to top it all off there was a couple of Lycian Tombs set into the cliff face above the town. What a pretty little place to anchor up for a couple of days.

“Couple of days” over, we ventured around the corner to Ucagiz, a quaint little Turkish fishing village that is now the base for the multitude of Gulets that do the Tour de Kekova. We anchored off yet another field of sarcophagi. You really did feel like you were in the mist of history.

We went ashore and had a few beers at Hassan’s, one of the local harbourside restaurants. The proprietor was quite a character in his chef’s black hat and proclaimed himself to be quite famous in these parts. We had a great chat to his family as we drank beer and ate a plate of mixed entrees. Lovely way to spend an afternoon.

It was however not the greatest place to spend a night. Ucagiz is in a slow enclosed bay with good holding, but its quite still and hot and the mozzies and flies were difficult to deal with.

It was about here that we finished Breaking Bad and switched to House of Cards. Movie nights were proving popular.

We were quite glad to leave the next morning and head off to Gokkaya Limani, about 4nm away. Gokkaya is a series of miniature fjord-like channels with a lovely anchorage at the head of a creek.

What a great place to swim and paddleboard. We swam round a small island and then off to the sight of a disused restaurant/disco. Then Jo wanted to go further so I went back to get the paddleboard, whilst she swam to some ruins.

Then down went the dingy and we went in search of that elusive Turtle photo. We managed to find a couple and with a bit of patience managed to get a few shots as they stuck their head up. Not perfect but okay.

We then did a circumnavigation of one of the islands and found the smugglers cave that we drove the dingy into. Pretty cool.

We checked out Andraki as a possible night time anchorage but it was just a gulet jetty and not much else to recommend it, so we pushed onto Finike. We had a broken dingy winch and a shower sump pump that was shorting out so a marina berth was in order. And it was so dam hot, we were looking forward to breaking out the aircon and having a decent nights sleep. So 75 euros later we had ourselves a marina berth.