Got a message from Rob, when I said we were off to Bilbao – he said “enjoy the Guggenheim and the Crianza”.

The Crianza had me stumped for a while, everyone’s heard of the Guggenheim but I’d never heard of a place called the Crianza!!!

Anyway back to our adventures in Bilbao…..

After some more unsuccessful VHF calls to both marinas, we decided our best strategy was to pull up on the collector jetty and go from there. So off to Getxo Marina we went and pulled in behind a Spanish yacht that had just got back from an expedition to Antarctica, with a very nice Spanish girl who spoke pretty good english. We were off and running.

From there, we went up to the marina office and filled in some forms saying we’d lobbed up in Spain. We weren’t quite sure but we suspected that we’d successfully checked in to Spain.

So off we went up to explore Getxo. We found the Tourist Bureau and asked where we could buy a wifi hotspot – as our French Wifi had stopped working. We were directed up the hill to the old port town of Getxo, where we found another Orange shop and signed up for some Spanish prepaid SIM cards. In between we had to go back to the boat to get a passport as this was needed to buy a SIM Card evidently.

With a bit of other shopping done, it was back to the boat, for some lunch before setting off again into Bilbao. Which turned out to be a good strategy, as several guys dressed in lifejackets and crash helmets knocked on our hull and announced themselves as Customs. They were really nice and spoke enough English to make the whole process pretty smooth.

Joan and Allan decided to explore Getxo some more, whereas I was itching to get into Bilboa proper. I wandered up to one of the metro stations and hopped on a very modern train and half an hour later I was in the centre of Bilbao.

It took a while to get my head around the Spanish street names and to be able to navigate off the street map. I made my way to the Guggenheim, which was closed on Mondays and took a heap of photos outside – its titanium exterior is one of the most photographed buildings in Spain.

Then I took a walk along the expansive boulevards that run along the river to the old city, with its narrow streets, old churches and tapas bars. Called in for a drink, it was only about 7pm so too early for dinner. After exploring the old city, crossed over the old bridge and back into the centre of town where I’d previously spotted some rather trendy Tapas Bars. The food is all laid across the top of the bar and you just chose what you want. You keep count and tell the bar person, when you are finished. 3 Tapas will more than fill you up – I had 4! At 2 Euro each plus 1.70 Euro for a glass of cianza it was a bargain.

Next morning, we visited the chanderly for some more boat stuff. Its a lot cheaper in Spain than France (or Australia) so we picked up a second anchor – a 16lb Fortress. We will run it in series, 7m in front of our main Rochna anchor when we need to. 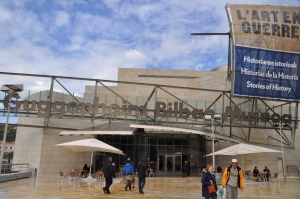 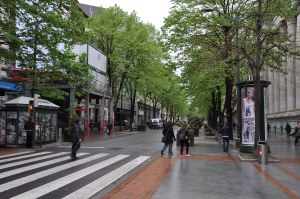 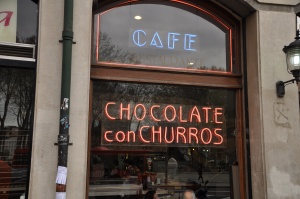 After lunch, we hopped on the metro again and headed back into Bilbao. Its was Tuesday (from memory) and the Peggy Guggenheim was open. We wandered through for a couple of hours but it didn’t seem as good inside as the ones in NY or Venice – there was some Picasso paintings and a single Dali, as well as an Andy Warhol Marilyn montage. But outside, it was simply stunning.

Then along the other side of the river to the old city and then an interesting search for a courier than could send something back to Oz. Not as easy as it seems. Eventually called into the Carlton Hotel and got them to arrange their courier.

Back at the boat it was time to get organised for the mornings departure to Llanes. 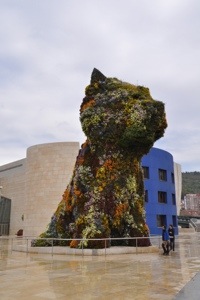 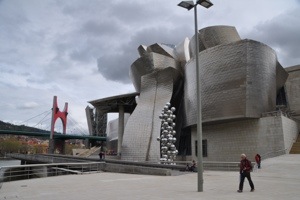 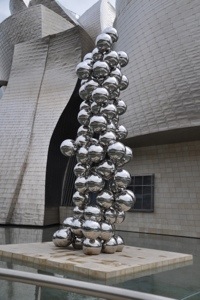 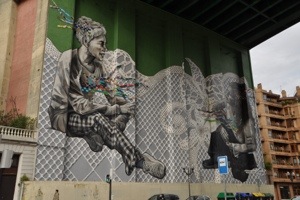