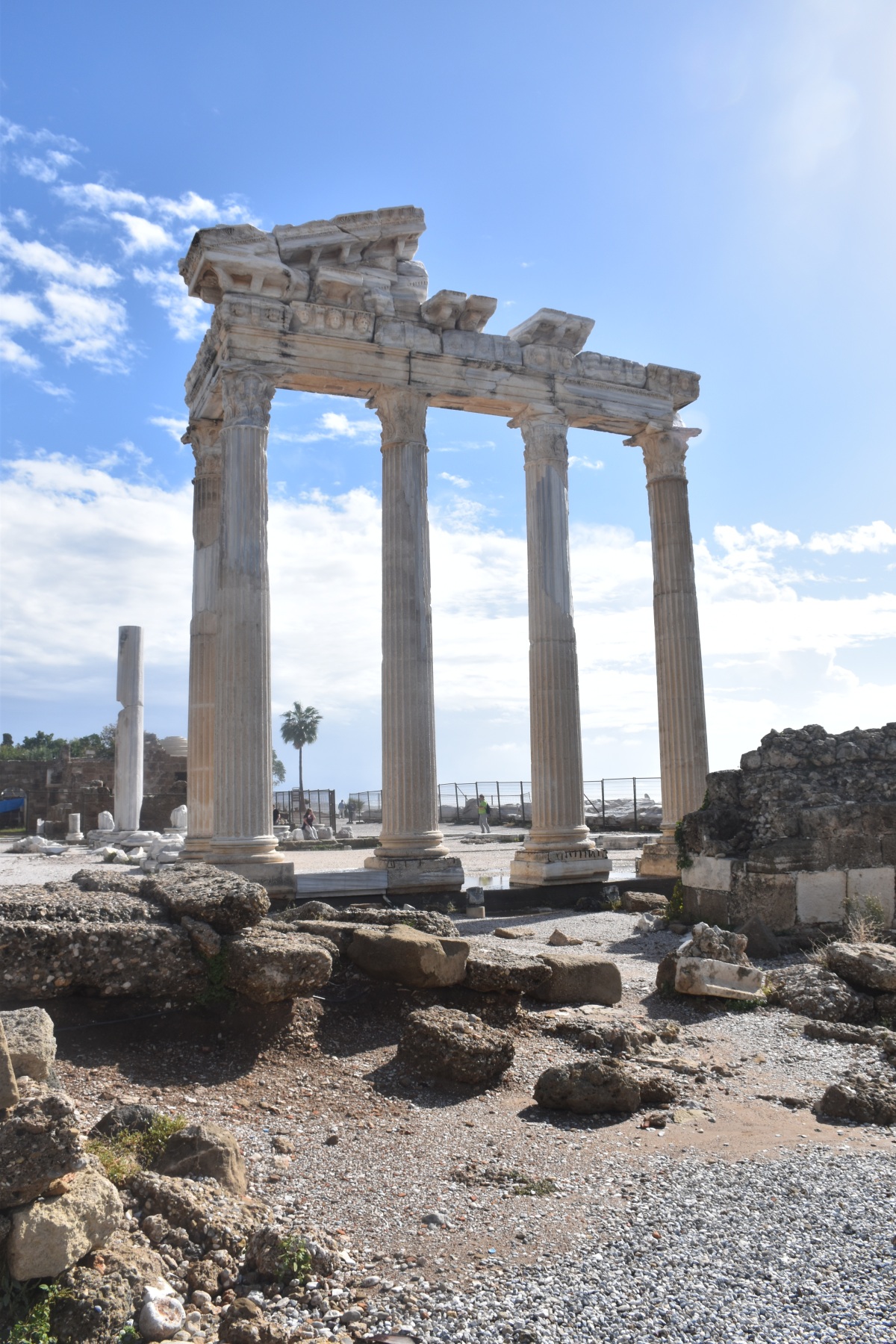 Hindsight’s a wonderful thing. It would have been great if we had been able to make Alanya that day so we could bunker down in a nice marina, whilst the very bad storm that was forecast passed by.

However, we didn’t quite make it.

We left Kemer in overcast conditions and pointed our nose across the bay to where Alanya lay 60nm away. The first part of the day was okay as we had a 20kt wind coming in at a 30-40 degree angle off our nose. We were making good mileage at 7kts with one engine on, lamenting the fact that we had to bypass Antalya, where we would have been able to get into the old port (conditions willing), but agreeing that we needed to get to our final Turkish destination before the weather set in.

But what’s the saying about the best laid plans? About one-third away across the wind had picked up to 40kts and was straight on our nose. We were lucky to make 4kts as the swell began to rise.

We were suddenly looking at a 1am arrival in Alanya, which meant 12 more hours of bashing into a crap sea.

We veered 40 degrees off the wind and headed towards land thinking the fetch would be less, and we may be able to creep along the coast, which should keep the fetch and the swell down. Interestingly, our course took us straight towards Side, 30nm from Alanya. 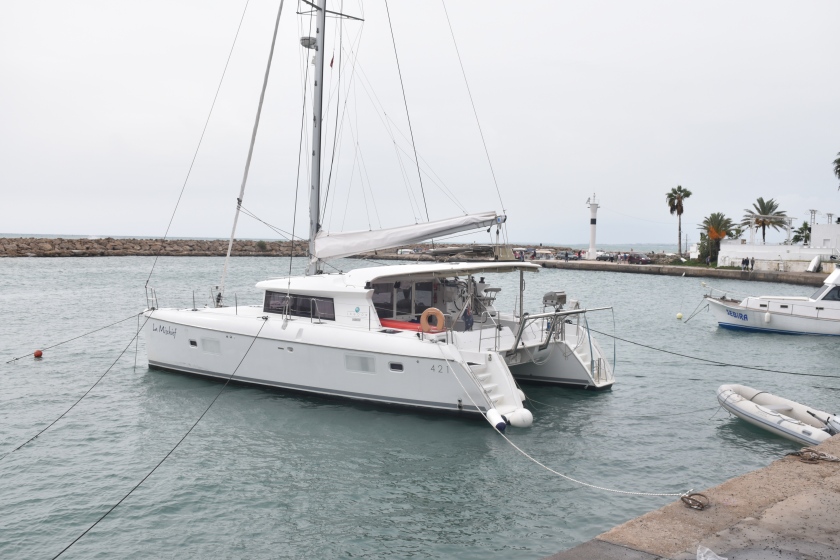 Now we’d been to Side on our road trip and spied the small harbour there. We’d read a blog of a yacht that had been caught there in bad weather and it was not that encouraging. However there appeared to be a good anchorage outside the harbour that had protection from the Easterlies that were building. 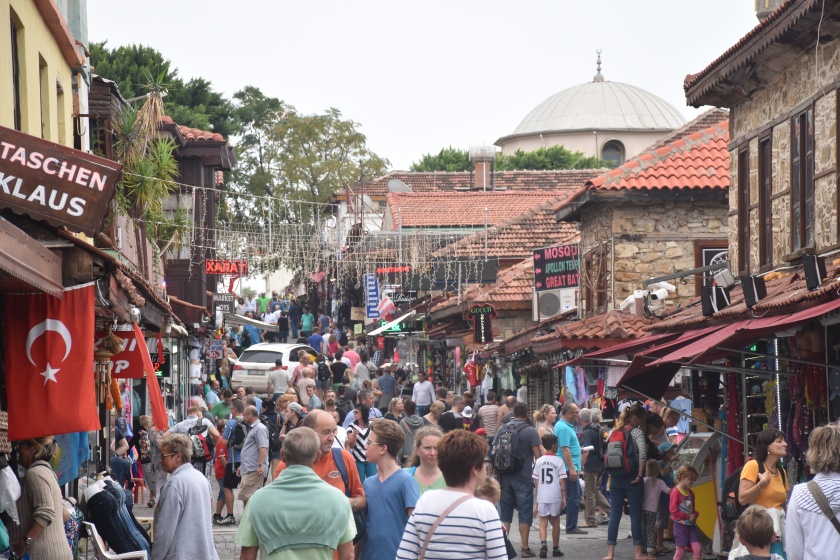 We got there about 3pm in the afternoon and poked our nose inside the small harbour to have a look. There was one other yacht in there, together with 5 or so gulets. We started to anchor next to the other yacht when Mustafa appeared and told us to both anchor and pick up a mooring in another spot, which we did. Mustafa turned out to be a fantastic guy and a godsend as he got us settled for the storm that was coming the next day. 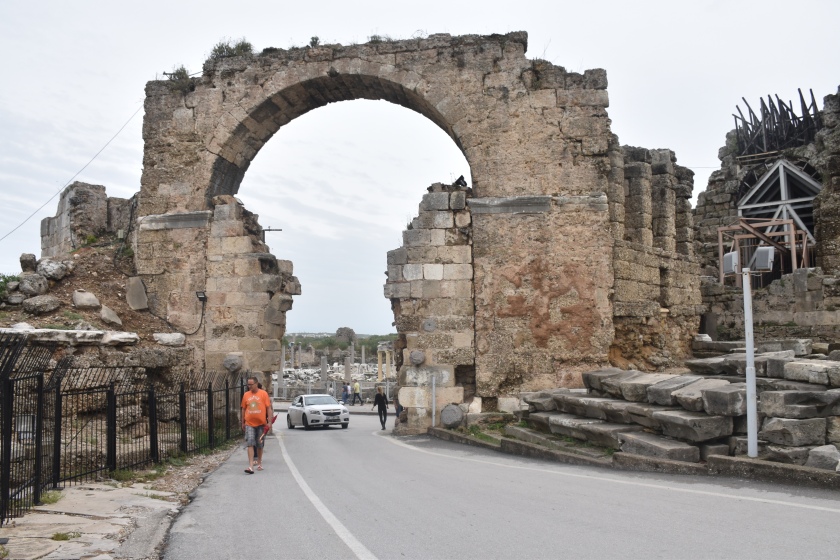 It was about this time that the second yacht up’ed anchor and moved along the coast to the river at Manavgat, something we should have considered as well. Rod suggests that Side is not the greatest place in a southerly blow.

That night it rained cats and dogs and quite a few other animals. The wind got up a bit as the thunderstorm hit – it swung round to you guessed it – the south. Wasn’t very pleasant but the mooring and the anchor held. Next day Mustafa came and helped us attach a second mooring and we also attached long lines to the shore from our front and middle cleats to help take the strain off our back cleats. We also moved away from the quay and used the dingy to pull us between the boat and the wall. We were all set for another few days of bad weather, inside the harbor. Luckily for us the wind blew fairly consistently from the East for the rest of our stay in Side, getting up to 48kts at times as the swell bent round into the harbour and caused La Mischief to surge back and forwards on its port mooring lines. The narrow harbor entrance was unprotected by a breakwater and with the swell rolling in there was no way we were going anywhere else even if we wanted to. 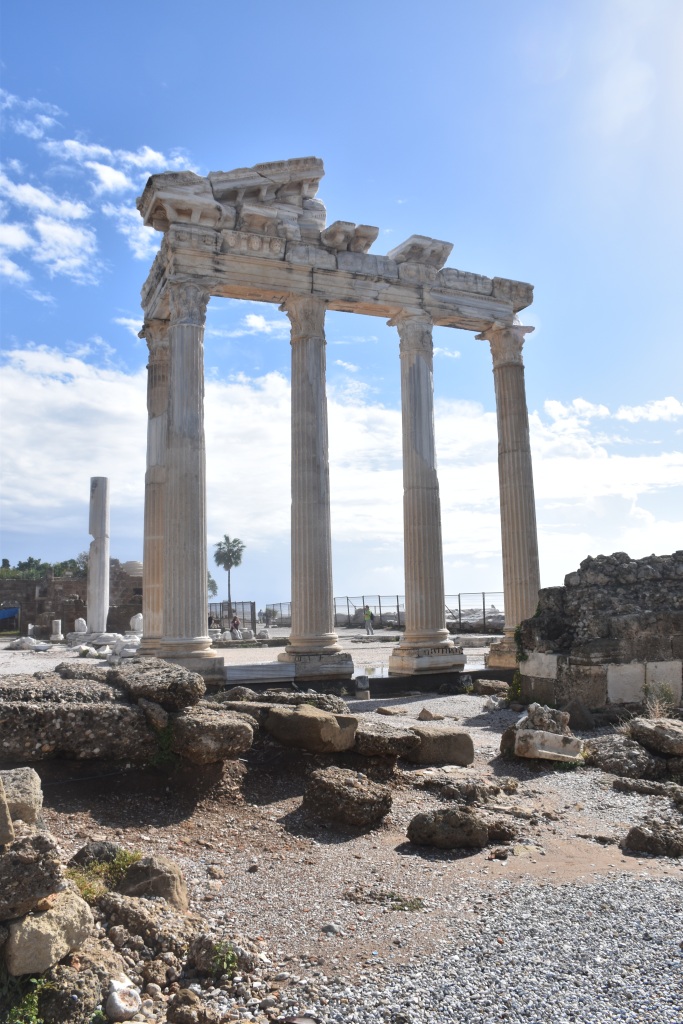 Mustafa came round for drinks a couple of times and once brought fresh fish (besides being the harbor master, he also had a fishing boat and a tour boat). He came for lunch and cleaned, gutted and cooked his fish on the BBQ. Yum. He loved that his name was the same as Attaturk’s and had named his son Atta in his honor.

A few days into the storm, Hugh joined us. We’d met Hugh in Fethiye at the Rugby and he’d agreed to join us for the trip across to Cyprus. Hugh finished Uni a few years ago and is now a tour guide with Topdeck, having also spent time in South America. Not sure, what Hugh thought when he rolled up to find La Mischief riding out a pretty bad storm, but Hugh turned out to be calm and considered and took it all in his stride. 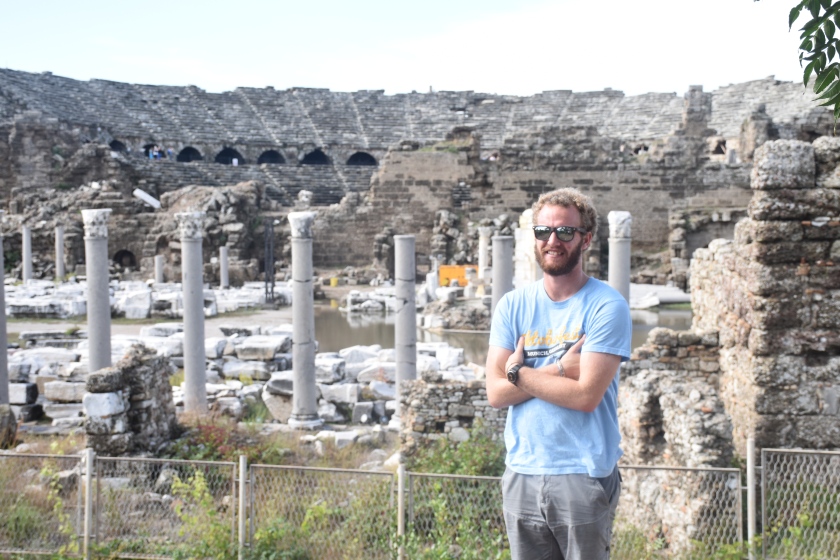 With some time to kill, the three of us went off exploring Side. It turned out to be a great place to be stranded for a few days as its great ruins are some of the most notable in Asia Minor. They cover a large promontory where a wall and a moat separate it from the mainland. There are colossal ruins of a theatre complex, the largest in this part of the woods, built much like a Roman amphitheatre that relies on arches to support the sheer verticals. The Roman style was adopted because Side lacked a convenient hillside that could be hollowed out in the usual Greek fashion. The theatre is big, seating 15,000 – 20,000 people. The temple of Apollo, right on the waterfront, with its wonderful Greek columns was being blasted by the sea spray. There’s also a good museum and some other Greek ruins that impressed us. The town too was good to wander through, with numerous walking streets on the small peninsula. There were some great beaches to the West with a nice promenade along them that we looked at but didn’t swim in. It was here that Hugh found his Putin on a Bear and Angela Merkel in a revealing top T-Shirts. Both absolute classics. 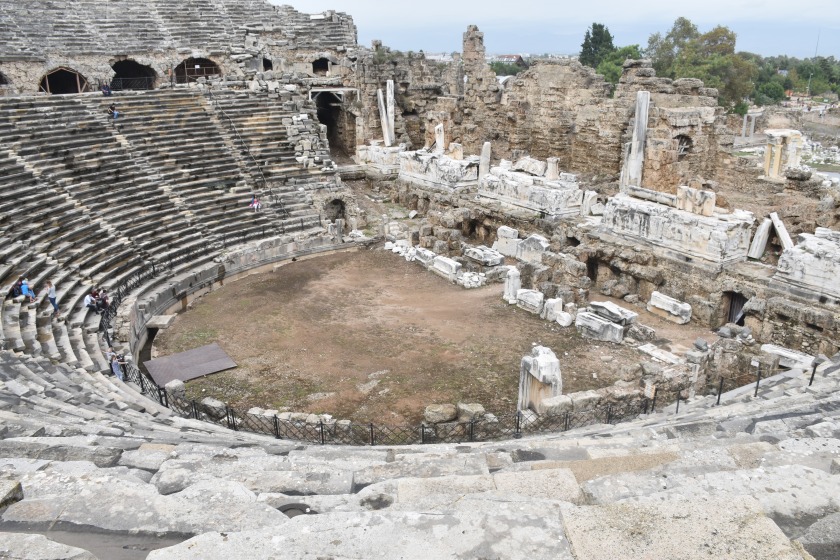 The second last morning we were there, a nasty thunderstorm came through and broke our port mooring. Luckily that was the last hoo-rar, and the wind quickly settled down after that. Not so for the swell as this took an extra day to abate.

Next day, we paid 200TL for a diver to repair the broken mooring, whilst Hugh took a dip to untangle the dingy painter from the prop, as it had somehow managed to get caught up in the last storm. The swell had settled enough for us to depart through the narrow entrance so then it was off to Alanya.

One thought on “The Wind Arrives… Followed By Hugh”