After a pleasant wander around Luarca in the morning, and some provisioning at the local markets, we headed back to our respective boats and headed off towards one of the scenic Rias that Galicia is renowned for. We had decided on Vilela as the place to anchor up and enjoy some fantastic scenery. The weather report looked good so off we went.

As usual Ooroo took off in front and it was largely a motoring exercise as the wind stayed well under 10 knots. Along the way,we got a call from Ooroo saying they were in the middle of a group of pilot whales a little bit ahead and further out to sea.

So with waypoint marked, we headed off in search of a whale adventure. Sure enough as we closed in on the way point, we saw a couple of pods of at least half a dazen whales each.

About 10 minutes later the wind rose abruptly to 20 kts then 30kts. Allan and I were busily reefing down La Mischief, allowing Joan to man the camera. She did however come over to our side of the boat, just as two or three whales decided to surface just under her nose. After letting out a loud sheik (whats he doing in this blog?), she managed to compose herself and the camera and got a good shot as the whales rounded up behind us.

By this stage the wind was climbing past 40kts and heading towards 50kts. Not again. Not when the forecast said light winds. Damn the spanish Weather Bureau. And for that matter the UK Weather Bureau – or whoever it is that provides the Navtex forecasts.

So now we had to find somewhere to hide. We were still a way off our destination. There was a big alumina port at San Ciprian ahead of us that looked promising, but Mike was on the radio and was advised not to go there. There was a small fishing village next door and this was also ruled out.

We finally settled on Burela, which is a commercial port with a fishing fleet as well as cargo and grain. They weren’t that keen to have two catamarans role up, but eventually they conceded and found some space for us. Once we’d decided on our overnight destination, we turned and ran for the coast and the apparent wind dropped below 35kts with the wind on our hind quarter. With 3 reefs in again, it was not that unpleasant as we sped into port.

Once inside the breakwater, we were directed to a spot on the wall that we managed to tie up to. We had plenty of fenders out and there was a ladder close by to climb up to the top with. Ooroo came in half an hour later and rafted up beside us.

And then the whole town came down to have a look at the two Australian Cats that had pulled up in their harbour. We were quite the tourist attraction. The Ooroo crew and Allan and Joan had a walk into town and came back with little to report.

We then sat down to try and work out this weather. We figured that if the weather on the grib that was 200nm to the north of us had slipped down and tripled in strength then this may have been the cause of our high winds. Then Mike remembered reading something on the JimB website, which said you should always look to leave early and be in by 2pm when the winds picked up.

So that is our new 2pm rule…leave early and get in by 2pm. And its turing out to be a very good rule in this neck of the woods. 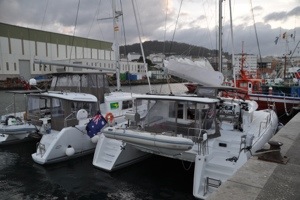 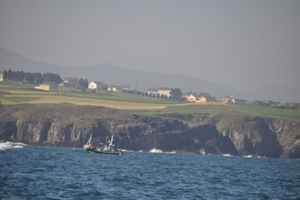